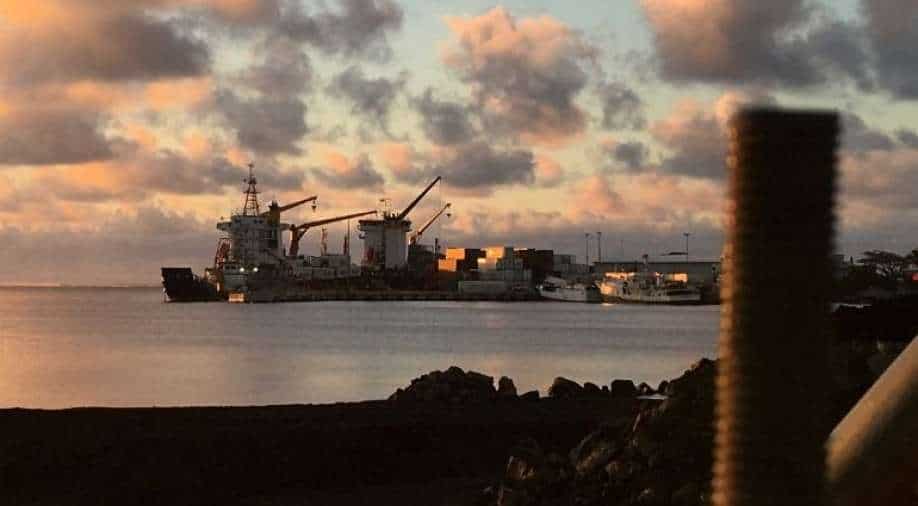 A container ship unloads at the Matautu port, which has been expanded through support from Japan, in the Samoan capital of Apia. (File Photo) Photograph:( Reuters )

According to the proposal, money collected would be put into a climate fund that would be used to install bunkering infrastructure in ports around the world to supply cleaner fuels, such as hydrogen and ammonia

In a bid to help speed the global shipping industry's move towards a more sustainable future, leading shipping associations have proposed a levy on ship carbon emissions.

There is growing pressure for the sector to become more environmentally friendly or green, cleaner and just overall reduce its ecological footprint. The sector, which is responsible for about three per cent of the world's CO2 emissions, carries about 90 per cent of global trade via sea.

Also read | Overlapping disasters expose harsh climate reality: the US is not ready

In a first, the International Chamber of Shipping (ICS) and Intercargo jointly proposed a levy that would involve mandatory contributions by ships trading globally and exceeding 5,000 gross tonnage, for each tonne of CO2 emitted.

The proposal was submitted to the UN's shipping agency, the International Maritime Organization (IMO) on Friday. According to it, the money collected through these mandatory contributions would be put into a climate fund that would be used to install bunkering infrastructure in ports around the world to supply cleaner fuels, such as hydrogen and ammonia.

According to an IMO spokesperson, all proposals are welcome and will be put up for discussion later this year. The spokesperson also added that the "proposals on market-based measures are in line with the initial IMO GHG (greenhouse gas) strategy".

"What shipping needs is a truly global market-based measure like this that will reduce the price gap between zero-carbon fuels and conventional fuels," said Guy Platten, ICS Secretary-General.

The IMO will hold an intersessional working group meeting scheduled for late October, ahead of a late-November session of the Marine Environment Protection Committee, which will address issues including carbon-reduction efforts.

In July, the European Commission proposed adding shipping to the bloc's carbon market, a move intended at a sector that had avoided pollution fees for more than a decade.

The ICS has claimed that "piecemeal" approaches such as that of the EU proposal, would complicate the conduct of maritime trade significantly.