Overlapping disasters expose harsh climate reality: the US is not ready 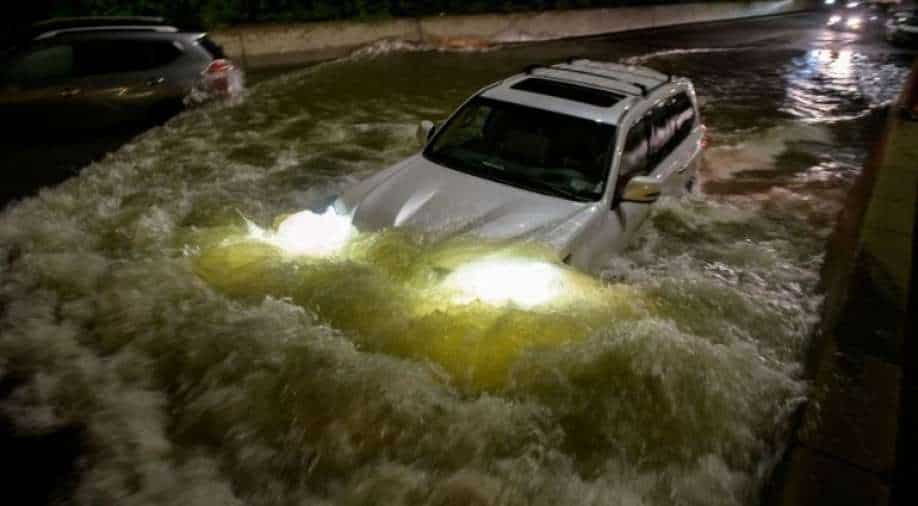 Disasters cascading across the country this summer have exposed a harsh reality: The United States is not ready for the extreme weather that is now becoming frequent as a result of a warming planet

In Louisiana and Mississippi, nearly 1 million people lack electricity and drinking water after a hurricane obliterated power lines. In California, wildfire menaces Lake Tahoe, forcing tens of thousands to flee. In Tennessee, flash floods killed at least 20; hundreds more perished in a heat wave in the Northwest. And in New York City, 10 inches of rain fell in just hours Wednesday, drowning people in their basements.

Disasters cascading across the country this summer have exposed a harsh reality: The United States is not ready for the extreme weather that is now becoming frequent as a result of a warming planet.

“These events tell us we’re not prepared,” said Alice Hill, who oversaw planning for climate risks on the National Security Council during the Obama administration. “We have built our cities, our communities, to a climate that no longer exists.”

In remarks Thursday, President Joe Biden acknowledged the challenge ahead.

“And to the country, the past few days of Hurricane Ida and the wildfires in the West and the unprecedented flash floods in New York and New Jersey is yet another reminder that these extreme storms and the climate crisis are here,” said Biden, who noted that a $1 trillion infrastructure bill pending in Congress includes some money to gird communities against disasters. “We need to do — be better prepared. We need to act.”

The country faces two separate but interlaced problems, according to climate and resilience experts.

First, governments have not spent enough time and money to brace for climate shocks that have long been predicted: everything from maintaining and fortifying electrical lines and stormwater systems to clearing forests of undergrowth in order to reduce the ferocity of wildfires.

“We’re feeling all the effects of that deferred maintenance,” said Kristina Dahl, a senior climate scientist at the Union of Concerned Scientists.

But there’s a second, more sobering lesson: There are limits to how much the country, and the world, can adapt. And if nations don’t do more to cut greenhouse gas emissions that are driving climate change, they may soon run up against the outer edges of resilience.

“If we already can’t cope with where we are, then there’s little hope that it’s going to improve in a warming climate,” Dahl said.

The country’s vulnerability in the face of extreme weather was punctuated by the downpour that flooded the country's largest city. New York City has invested billions of dollars in storm protection since Hurricane Sandy in 2012 — investments that seemed to do little to blunt the impact of the storm.

Rain poured down in furious torrents, turning the subway system into a kind of flume ride. Central Park recorded 7.19 inches of rain, nearly double the previous record set in 1927 for the same date, according to the National Weather Service, which issued the city’s first-ever flash flood emergency alert.

Before the storm, city and state officials activated preparation plans — clearing drains, erecting flood barriers in the subway and other sensitive areas, and warning the public. But the rainfall dumped more water, and faster, than what the city had factored into its new stormwater maps as an “extreme” flood event.

The pattern of damage reflects the relationship between climate exposure and racial inequality: Impacts were more apparent in low-income communities of color, which, because of historic inequalities, are typically more prone to flooding, receive less maintenance from city services, and frequently experience lax housing code enforcement.

Most of those killed in New York City drowned when floodwaters rushed into their basement apartments. Many such apartments do not meet safety requirements but have proliferated as affordable housing for the working poor and immigrants living in the city illegally, who may fear complaining to authorities about safety violations.

In one case, Tara Ramskriet, 43, and her son Nick, 22, drowned when water filled their basement apartment in the Hollis section of Queens so quickly that family members could not pull them out against the flow, and a wall collapsed, trapping them inside.

Neighbors were outraged, saying it took fatalities to bring city inspectors to the scene.

“This happens all the time,” said Jennifer Mooklal, 33, who lives across the street from the Ramskriets. “Even if it’s just rain, our basement gets flooded. We’ve been dealing with this problem for years and have been asking the city, but no one is listening to us.”

Damage from extreme weather, and threats to human life, will only increase as the planet warms. For every 1.8 degrees Fahrenheit of global warming, the atmosphere holds about 7% more moisture, scientists have found. That means much heavier rainfall when storms do occur.

Across the continental United States, the heaviest downpours have become more frequent and severe, according to the federal government’s National Climate Assessment. The Northeast has seen 50% more rainfall during the heaviest storms compared with the first half of the 20th century.

New York City is particularly vulnerable to flooding. Three-fourths of the city is covered by impervious surfaces like asphalt, which means runoff is channeled into streets and sewers rather than being absorbed by the ground.

And the city’s century-old subway system was not designed for a warming climate. Even on dry days, a network of pumps pours out 14 million gallons of water from its tunnels and stations. Heavy rains can overwhelm the system, as they did on Wednesday.

The Metropolitan Transportation Authority has invested $2.6 billion in resiliency projects since Hurricane Sandy inundated the city’s subways in 2012, including fortifying 3,500 subway vents, staircases and elevator shafts against flooding. Still, this week’s flash floods showed that the system remains vulnerable.

One reason is that city and federal officials focused on protecting against the kind of coastal storm surge that Sandy wrought, according to Amy Chester, managing director of Rebuild by Design, a nonprofit group that works on climate resilience.

But in the case of Hurricane Ida, the main threat was rainwater flowing downhill, not storm surge pushing in from the coast. So much water fell that it overwhelmed storm drains, overflowed riverbanks and poured into basements, from the hilly parts of Manhattan’s Washington Heights to the inland flats of Jamaica in Queens.

The investments that protect against storm surge differ from those that guard against extreme rain, Chester said.

Coping with severe rainfall means more places to absorb and hold water, whether with so-called green solutions like parks and bioswales or traditional structures like underground retention tanks. And it means increasing the capacity of the sewer system to handle a greater volume of water.

Because New York has mostly been spared the type of severe rainfall that occurred Wednesday, officials have made it less of a priority.

Other countries have heeded the warnings of climate scientists and acted.

In the Netherlands, where much of the country lies below sea level, the government strengthened flood design standards and in 2007 created a program called Room for the River, which in essence authorized the wholesale redesign and rebuilding of dozens of vulnerable watersheds around cities like Amsterdam and Rotterdam. The goal was to prepare for the sort of one-in-10,000-year floods that Dutch scientists were warning might become more frequent.

In that country, government water boards have the ultimate authority over land use. If they determine an area is needed for flood protection, its residents must move.

Specific taxes are dedicated to water management. There is no National Flood Insurance Program for residents in flood zones in the Netherlands because, the Dutch argue, the government’s job is to protect people from floods, not help homeowners rebuild in areas vulnerable to damage.

Among other things, Room for the River created dozens of new parks, enhancing underserved neighborhoods, resettling populations living in flood zones into new homes out of harm’s way, and girding the nation’s economy in the process.

In the United States, efforts to protect U.S. cities from damage by severe storms and rising seas have been plodding. There are many reasons, including government reluctance to impose on private property, a legacy of racial and economic injustice, and a system of governance and regulation that often moves far slower than the hastening pace of climate change.