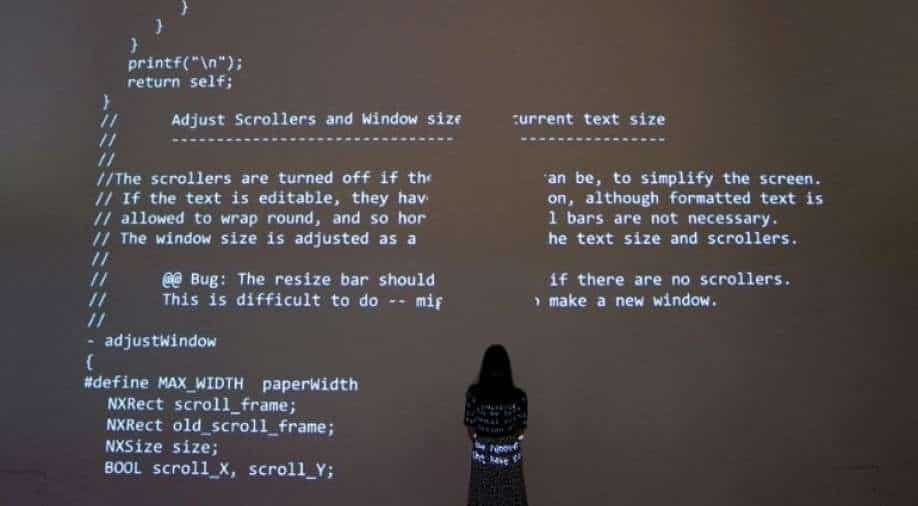 A person poses in front of a projection of source code during a media preview at Sotheby's on June 24, 2021, in New York, for Sotheby's NFT Auction of Sir Tim Berners-Lee "Source Code for the World Wide Web," which will be offered for sale as an NFT Photograph:( AFP )

The NFT is considered valuable by some because blockchain technology authenticates that it is one-of-a-kind and has been officially created, or 'minted', by Berners-Lee himself.

The source code for the World Wide Web by Tim Berners-Lee has sold for $5.4 million in the form of non-fungible token (NFT) at Sotheby's in an online auction.

The NFT is considered valuable by some because blockchain technology authenticates that it is one-of-a-kind and has been officially created, or 'minted', by Berners-Lee himself.

Sotheby's in New York organised the weeklong sale of the programme that paved the way for the internet we know today more than 30 years after its creation.

The lot included an animated version of Berners-Lee's nearly 10,000 lines of code and a letter from the British-born computer scientist himself.

"Ten years ago, we wouldn't have been able to do this," said Cassandra Hatton, vice-president at Sotheby's, referring to the recent boom in NFTs.

Hatton said this work is unique because of its importance for the creation of the World Wide Web.

In 1989, physicist-turned-computer-scientist Berners-Lee envisioned a system of information sharing that would allow scientists to access data from anywhere in the world.

In 1990 and 1991, he wrote the program that created the first internet browser, laying the practical foundations for the current web.

In the process, he also invented the URL, internet address, HTTP which allows users to find a site, and HTML the standard coding language for creating websites.

Determined to make the web an open space, Berners-Lee did not patent his program but left it freely available to everyone, which contributed to its spread.

A little more than three decades after its invention, Berners-Lee put the original program files up for sale as a collector's item. At the end of the auction, he will receive part of the sale profit, but he intends to donate all of his proceeds to charity.

The sale is the latest in a series of moves by traditional auction houses to embrace the blockchain-based assets, which exploded in popularity in early 2021.

In March, an NFT of a digital collage by the American artist Beeple fetched $69.3 million at Christie's, in the first sale by a major auction house of an artwork which does not physically exist. Twitter boss Jack Dorsey sold his first tweet in NFT form for $2.9 million.

An NFT is a digital object such as a drawing, animation, piece of music, photo, or video with a certificate of authenticity created by blockchain technology that underlies cryptocurrency. It cannot be forged or otherwise manipulated.

NFT exchanges take place in cryptocurrencies such as bitcoin on specialist sites, but traditional auction houses are seeking to capitalise on the phenomenon.