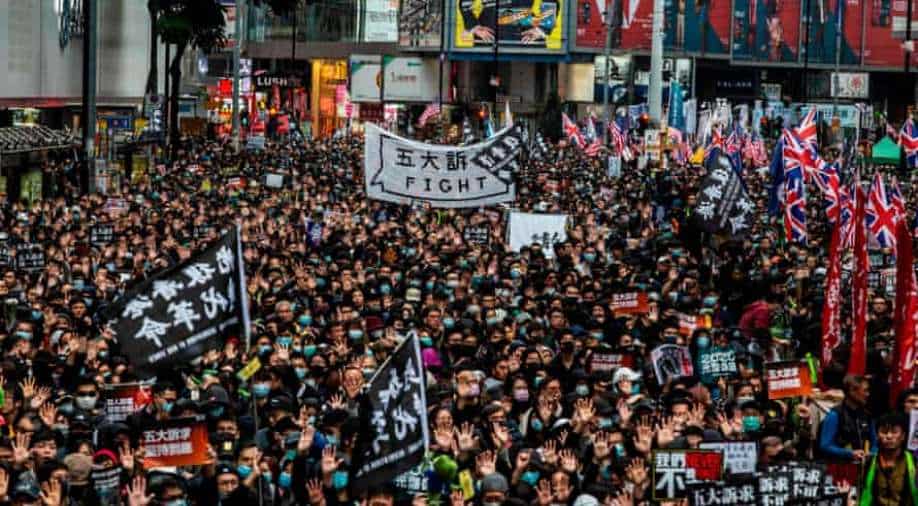 In response, police fired several rounds of tear gas and water cannon at crowds including families before halting the event.

A prominent rights group staged an act of defiance on New Year's Day for the first time in 12 months -- on a much smaller scale -- calling for release of "political prisoners" who were arrested for demonstrations against the draconian National Security Law imposed by Beijing.

In response, police fired several rounds of tear gas and water cannon at crowds including families before halting the event.

According to South China Morning Post, the three-person demonstration was organised by the Civil Human Rights Front, which has seen its applications for events repeatedly rejected by police over the past year.

The front is the group behind the city's annual July 1 march, as well as three massive 2019 protests against the since-withdrawn extradition bill that drew hundreds of thousands of participants into the streets.

Friday's show of solidarity with jailed activists was minuscule, but was nonetheless heavily scrutinised by police.

"We demand the release of all political prisoners, including civil rights activists in mainland China and Hongkongers, as well as the comrades detained behind us [in Lai Chi Kok]," said Chan, as quoted by South China Morning Post.

Chan faces a raft of public order charges accumulated over the past two years. He was joined by Lee Cheuk-yan atop the van, which was flanked on either side by banners reading "free all political prisoners".

Lee called out messages of support to protesters and political figures inside the reception centre across the road, including media tycoon Jimmy Lai Chee-ying, who was returned to custody by the Court of Final Appeal on Thursday to await trial on money-laundering and national security law charges.

"The creative protest was designed to get around a ban on gatherings of more than two, put in place by authorities to stem the spread of the coronavirus. Activists have argued police have used the ban to stifle freedom of assembly, refusing to grant permission for protests even at times where the infection count seemed to ease," South China Morning Post reported further.

Earlier this week, the front said that it would replace its annual full-scale New Year's march with the lower-key van event due to its own concerns over coronavirus.

After departing from Lai Chi Kok, the group next headed to Tsim Sha Tsui, before ending at the Legislative Council complex at Admiralty.

However, after they began chanting slogans at Lai Chi Kok, a group of "uniformed officers" arrived to join the dozen plain-clothes police already at the scene.

"More than once, they accused the three men - Chan, Lee and the front's deputy convenor, Sam Yip Kam-lung - of violating the ban on gatherings, Chan said. They were also asked to turn down the volume of their speaker," SCMP reported.

It was further reported since the extradition bill sparked massive waves of protests in June 2019, police have arrested more than 10,000 people in connection with the movement and more than 3000 of them were prosecuted.

"The front will continue to fight for our rights to demonstrate and assemble. We will not give up just because we know the police will reject us," he said.

The draconian National Security Law imposed on the city by Beijing criminalises secession, subversion and collusion with foreign forces and carries with it strict prison terms. It came into effect from July 1.

Several of those disqualified were sitting lawmakers, who weresubsequently ejected from the parliament by Beijing overruling constitutional precedent and bypassing Hong Kong's courts on November 11, sparking the mass resignation of the entire pro-democratic camp.