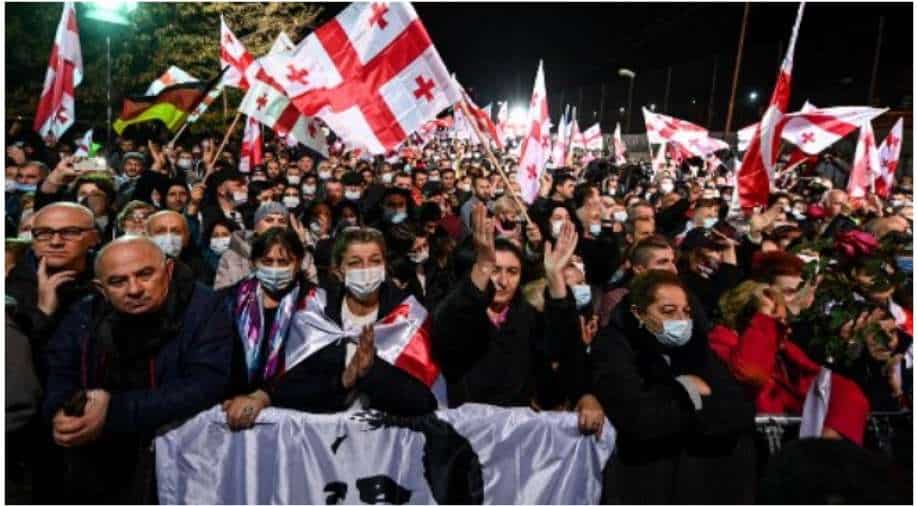 Mikheil Saakashvili, Georgia's former president was arrested on October 1. He has refused food for more than a month now in protest of his arrest

Thousands in Georgia rallied on Saturday to show support for country's jailed ex-president Mikheil Saakashvili amid growing fears over his health because of a hunger strike lasting several weeks.

The protesters waved Georgian flags and chanted Saakashvili's name. The protests were carried out outside the prison in Rustavi city where Saakashvili is being held.

Georgia's pro-Western reformer president from 2004-2013, Saakashvili was arrested on October 1 on his return from exile in Ukraine. He has refused food for 37 days to protest his imprisonment, which he says is politically motivated.

The jailing of the country's foremost opposition leader has further fuelled a protracted political crisis that gripped Georgia last year after the opposition denounced fraud in parliamentary elections won narrowly by the ruling Georgian Dream party.

The protesters set up a dozen of tents outside the prison in Rustavi, vowing round-the-clock permanent protests until Saakashvili is transferred to a hospital, as recommended by medics.

"Saakashvili's life must be saved," Nika Melia, the chairman of his United National Movement -- the country's main opposition party -- told the crowd.

"We give the government 24 hours to transfer him to a civilian hospital."

"If the demand is not met, all of Georgia will gather on Monday in (Tbilisi's) Freedom Square," he said.
"Our struggle will be unrelenting, peaceful."

He ridiculed as a "fairytale" claims by Georgia's state security service that Saakashvili was plotting a coup from prison.

One of the demonstrators, actor Bachi Valishvili, 26, said:  "The Georgian government is leading us into an abyss of tyranny. We demand our democracy back."

"We demand Georgia's third president be transferred to a proper clinic and treated adequately, so that his life is saved," he added.

"We will not stand by and wait for the man to die, we will not let our democracy die."