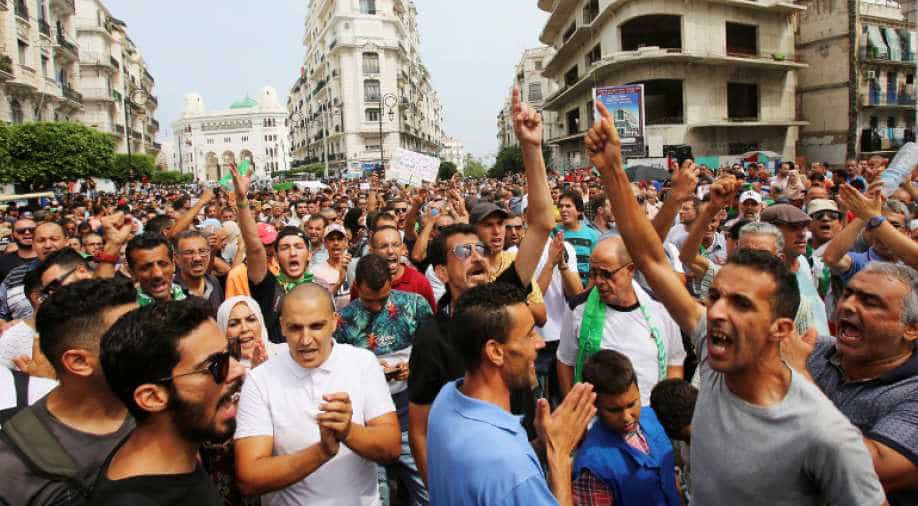 Thousands of protesters took to the streets of the Algerian capital on Friday in defiance of a heavy security presence to demand the ouster of the country's army chief.

Demonstrators gathered near the capital's main post office square -- the epicentre of Algeria's protest movement that forced longtime president Abdelaziz Bouteflika to step down in April -- this time calling for the removal of General Ahmed Gaid Salah.

"The people want the fall of Gaid Salah," they chanted, referring to the de facto strongman in post-Bouteflika Algeria.

"Take us all to prison, the people will not stop."

Friday's demonstration marked Algeria's 31st consecutive week of rallies, but protesters faced a heavy deployment of security forces in the city centre and along its main avenues.

The army chief on Wednesday ordered police to block protesters from outside Algiers entering the capital, in a bid to stem the flow of people attending anti-regime rallies.

The tougher line on demonstrations comes after interim president Abdelkader Bensalah on Sunday announced a December 12 date for a presidential election to fill the vacuum left by Bouteflika's departure.

Gaid Salah has led the push for polls by the end of 2019, despite mass protests demanding political reforms and the removal of the former president's loyalists -- including Gaid Salah himself -- before any vote.

In the runup to the rally, police made several arrests near the square, AFP photographers said.

Police also stopped vehicles on main streets in the capital and an AFP journalist saw officers in plainclothes ask numerous people for identity papers, before some were led off to nearby vans.

A police helicopter hovered above, while security forces stopped cars headed towards the centre from Algiers' southwest entrance.

Activists on social media reported traffic jams stretching "several kilometres" from the entrances of the capital.

Said Salhi, deputy head of the Algerian League for the Defence of Human Rights, condemned the heightened security measures as "illegal".

Demonstrations have officially been banned in Algiers since 2001 but the prohibition had been ignored since rallies started on February 22 against the ailing Bouteflika's bid for a fifth presidential term.

Presidential polls originally planned for July 4 were postponed due to a lack of viable candidates, plunging the country into a constitutional crisis as Bensalah's 90-day mandate expired the same month.

The army's high command has rejected any solution to the crisis other than presidential elections "in the shortest possible time".

On Thursday, Amnesty International slammed the "growing crackdown that has seen dozens of protesters arrested over the past 10 days".

Heba Morayef, the rights group's Middle East and North Africa head, said the "resumption of sweeping arbitrary arrests... is a clear indication that the right to freedom of assembly and expression in Algeria is still very much under threat".

Boumala, a leading figure in the protests, was detained on accusations of "undermining national unity", and a court on Thursday ordered his pre-trial detention, his lawyer Abdelghani Badi said on Facebook.

He was the third protest movement figure to be detained within a week, following Karim Tabbou late last week and Samir Benlarbi on Tuesday.