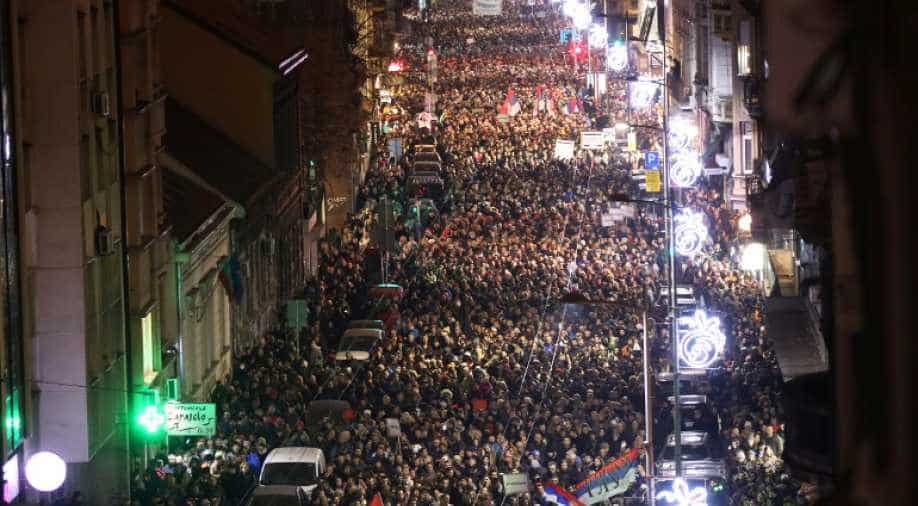 Thousands of people chanted 'Vucic thief' as they marched peacefully through the city centre in the fourth such protest in as many weeks. They demanded media freedoms, an end to attacks on journalists and opposition politicians.

Thousands of people chanted "Vucic thief" as they marched peacefully through the city centre in the fourth such protest in as many weeks. They demanded media freedoms, an end to attacks on journalists and opposition politicians.

Backers of the Alliance for Serbia, an opposition grouping of 30 parties and organisations, say Vucic is an autocrat and his party is corrupt, something its leaders vehemently deny.

In an interview with the pro-government Studio B TV during the protest, Vucic said he was ready to discuss the opposition demands.

"I am ready to look at what causes dissent of the people," he said, after being jeered by a group of protesters as he entered the television station building.

Vucic earlier suggested he was willing to test his party`s popularity in a snap vote, although Vuk Jeremic, a former foreign minister and the head of the small People`s Party, part of the alliance, said the opposition would boycott any election.

"There will be no legitimate elections in Serbia with the participation of the opposition until after normal conditions for elections and living are created," Jeremic said.

According to a poll by the Belgrade-based CESID election watchdog in October, Vucic`s SNS enjoys the backing of 53.3 per cent of electorate while other parties are trailing far behind.

If the opposition ran as an alliance, rather than individual parties, they could count on around 15 per cent of the vote. Their joint participation in a vote has yet to be agreed and so far they are only united in their animosity to Vucic and his party.

The SNS-led ruling coalition has a comfortable majority of 160 deputies in the 250-seat parliament. The next national election is due in 2020.

Major opposition protests have been relatively rare in Serbia since the popular unrest that ousted former strongman Slobodan Milosevic in 2000.

Most of current opposition leaders served in successive pro-Western coalitions that led Serbia between 2000 and 2012 when SNS forged a coalition with Milosevic's Socialists and came to power.

A nationalist firebrand during the violent collapse of the former Yugoslavia in the 1990s, Vucic later embraced pro-European values and set Serbia`s membership in the European Union as the country`s strategic goal. He also maintains close ties with Russia and China.