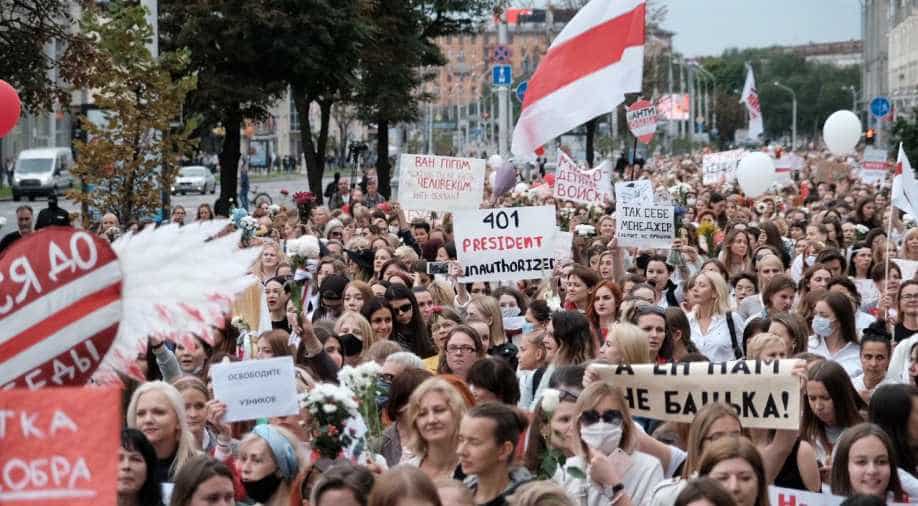 Some protesters have displayed bruises from a violent police crackdown in the days after the election, when over 7000 protesters were detained.

More than 10,000 women have marched through the Belarusian capital on Saturday in a quietly powerful response to the gruesome violence inflicted on thousands of Belarusians over the previous days.

The women protesters were beating pots and pans and shouting for the resignation of the country's authoritarian president in the 35th consecutive day of large anti-government protests.

Unprecedented demonstrations broke out in Belarus last month after strongman President Alexander Lukashenko, who has ruled the ex-Soviet state for 26 years, claimed to have defeated opposition candidate Svetlana Tikhanovskaya and won re-election with 80 percent of the vote on August 9.

Protesters say the election was rigged to hand Lukashenko a phoney landslide win and that Tikhanovskaya - who has since fled to Lithuania - was the real winner.

Thousands of protesters were on the roads, potentially setting the scene for a new show-down with riot police. As the demand for change intensifies and reaches even the factories that are the pride of Alexander Lukashenko’s neo-Soviet economy, the authoritarian ruler ends the week clinging on to power in defiance of an ever-broader coalition of opponents. But from the beginning, this has been an uprising inspired and led by women.

Also read | If Belarus falls, Russia will be next, says Lukashenko

Some protesters have displayed bruises from a violent police crackdown in the days after the election, when over 7000 protesters were detained.

The protests are the largest and most widespread of Mr Lukashenko's 26 years in power.
Sunday demonstrations in the capital of Minsk have repeatedly brought out crowds of more than 100,000.

Protests have broken out in other major cities in Belarus and strikes have hit some of the country's major state-owned industries, previously a base of support for the embattled 66-year-old leader.
Mr Lukashenko met Saturday with top officials of the country's security agencies.

Throughout the unrest, he has rejected any concessions, has repeatedly accused Belarus' western neighbours of preparing to overthrow his government.

In one show of aggressive defiance, he was seen striding with an automatic rifle across the grounds of his presidential residence.

As the protests persist, questions loom about possible action by Russia to prop up his regime.
Mr Lukashenko is meeting with Russian President Vladimir Putin on Monday in their first face-to-face contact since the unrest began.

Mr Putin has said he stands ready to send Russian police into Belarus if the protests turn violent, stoking fears that Moscow could use the political dissent as an excuse to annex its neighbour.