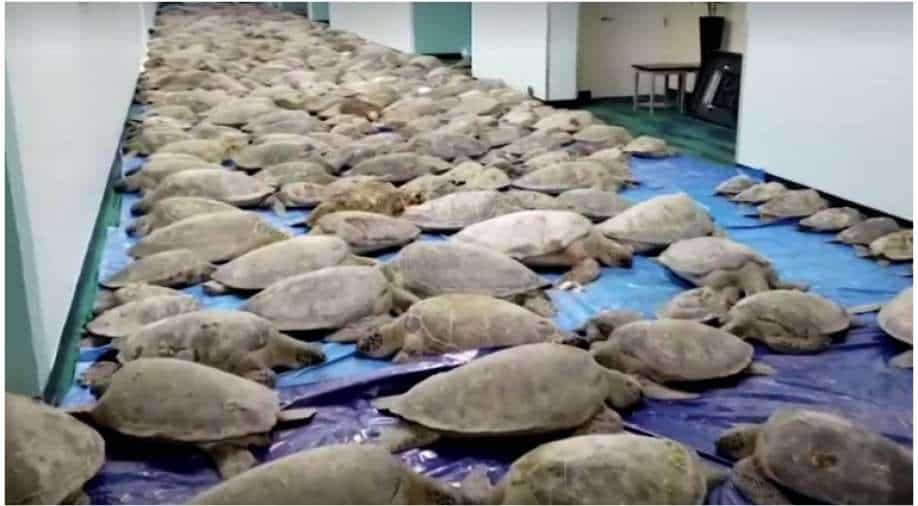 Rescue turtles at a convention center in Texas Photograph:( AFP )

Volunteers have rescued about 4700 turtles

The cold snap in Texas is affecting animal life in addition to creating difficult situation for residents. The temperature has gone down unusually and turtles, not used to such low temperature have been affected. Thousands of turtles have been washing up on the beaches of South Padre Island. Volunteers have rescued about 4700 turtles. The turtles have been brought to a convention center and are being kept in tubs and enclosures. They will be released when ocean water warms up.

Video shot by Ed Caum, executive director of the South Padre Island Convention and Visitors Bureau referred to the turtles as being 'cold-stunned'. It is a condition where cold-blooded animals suddenly exhibit hypothermic reactions such as lethargy and an inability to move when the temperature in the environment around them drops.

"We've brought them to the convention center to get their core temperatures back up," said Caum, narrating one of the videos.

In the latest video posted on Facebook on Wednesday (February 17), Caum related how the center's power and water supplies were restored overnight.

"We've expanded down both wings. The heat is coming back up in the corridor," Caum said as the video shows a passageway filled with turtles lying end-to-end on blue canvas.

In addition to the cold wave, Texas has been hit by power outage for last several days. Millions of Texans don't have electricity. This has added to their difficulties during the cold wave.

The NWS said the storm would bring ice, sleet and heavy snow to parts of Texas, Louisiana, Arkansas and Mississippi as it tracks to the northeast, causing power outages, tree damage and making driving hazardous.

More than 30 storm-related deaths have been reported by media in the United States since the cold weather arrived last week, many in traffic accidents.

A man in Louisiana died when he hit his head after slipping on ice, and a 10-year-old Tennessee boy perished after he and his six-year-old sister fell through the ice into a pond Sunday.

A dozen animals -- including one 58-year-old female chimpanzee -- died during the freeze at rescue sanctuary Primarily Primates near San Antonio, the organization said on its website Wednesday.