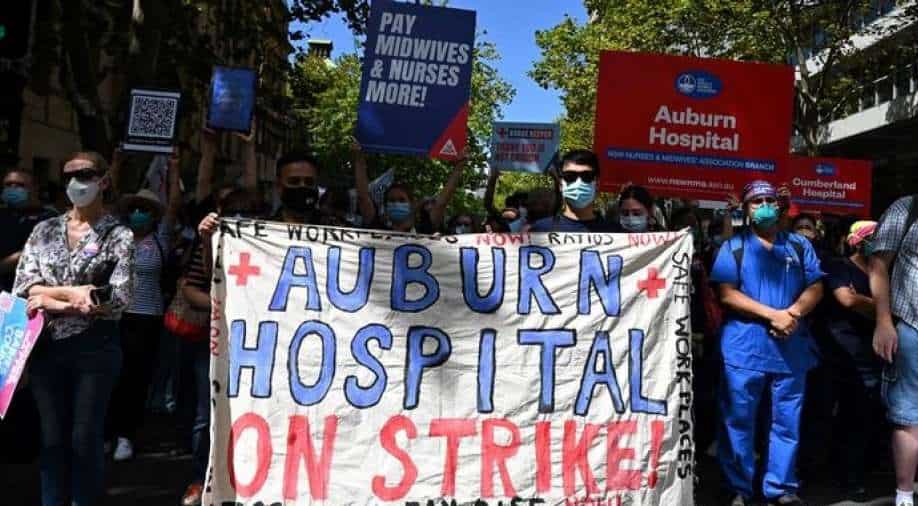 For the first time in a decade, thousands of nurses in an Australian province took to the streets after talks with the government on pay rise and shortage of staff fell through.

Defying a last minute order by the state’s industrial relations commission to call off the strike, nurses and midwives across New South Wales (NSW) gathered in front of the state parliament building in Sydney, holding placards saying “Fatigued, exhausted, worn out and burnt out,” “Need more nurses now” and “Stop telling us to cope.”

According to Australian media, nurses were seeking a pay rise of more than 2.5 per cent and plug staff shortages to treat the patients better.

The strike will be staggered through the day and will include staff from more than 150 hospitals around the state.

Midwifery Nurses March in #Sydney, #Australia
They protested in front of the Sydney Parliament, calling for better working conditions and an increase in the number of nurses. pic.twitter.com/lsHcxnp8e1

NSW Health Minister Brad Hazzard said it was “unfortunate” and “disappointing” that nurses persisted with the strike.

Hazzard told radio station 2GB that the government was working on a solution but said some suggested changes to nurse-patient ratios could cost “a billion dollars.”

But the union officials said the strike would proceed as planned, as discussions had not resulted in a resolution that would “go any way to satisfying the association the real concerns of nurses are being addressed”, said a report by the Guardian.

A spokesperson for the NSW Ministry of Health acknowledged that staff have “worked tirelessly during the two years of the Covid-19 pandemic”, according to Australian broadcaster ABC News.

Australia has been witnessing a massive dip in Covid cases recently.

Officials registered 46 new deaths, with the pandemic total standing at 4,664.