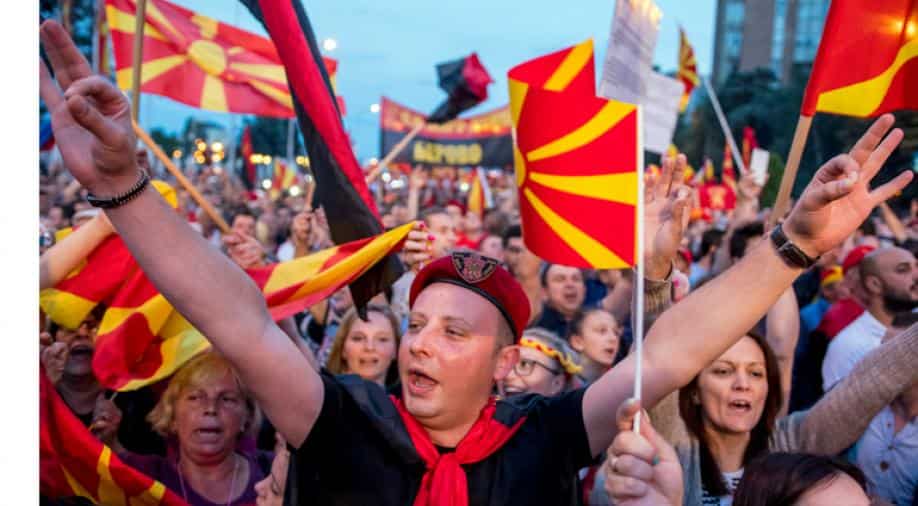 Thousands of supporters of Macedonia's rightwing opposition VMRO-DPMNE party took to the streets of the capital Skopje on Saturday to protest against plans to change their country's name, which has been at the centre of dispute with neighbouring Greece.

Zoran Zaev, prime minister of the former Yugoslav republic, said Wednesday that negotiations with Athens to resolve the 27-year-old dispute were in "the final stages".

Athens objects to the neighbouring state's constitutional name, Republic of Macedonia, because Greece has its own northern province called Macedonia, and fears it may imply territorial ambitions.

The contentious issue has stymied Macedonia's hopes of joining the European Union and NATO, as Greece can veto its membership bids.

The VMRO-DPMNE will not support any constitutional bid to change the name of the country, said Hristijan Mickoski, new leader of the opposition party.

"We are very clear on this subject," he added during the protest march.

Former prime minister and VMRO-DPMNE leader Nikola Gruevski, who governed Macedonia from 2006 to 2016, was absent from the rally after being sentenced on Wednesday to two years in jail by a Skopje court for abuse of power over the purchase of a luxury Mercedes.

Hungary's firebrand nationalist Prime Minister Viktor Orban sent a video message of support in which he hailed the party's "wise and courageous leaders... who won't bend under pressure from foreign powers".

Protests are also being organised for next week in northern Greece where some oppose what they see as a compromise solution being finalised between the Greek and Macedonian leaders.

The agreed new name will almost certainly contain "Macedonia", an outcome ardently opposed by many Greeks protective over their won northern province of Macedonia -- the cradle of the ancient empire of Alexander the Great.

Names in discussion have included "New Macedonia" and "Upper Macedonia".

According to a senior Macedonian official any name change agreed with Greece would have to be ratified by parliament and then put to a referendum.

In light of Greece's objections, the country joined the United Nations in 1993 with the unwieldy name of the Former Yugoslav Republic of Macedonia, or FYROM for short.

But dozens of countries including the United States and Russia have already recognised the country as "Macedonia".