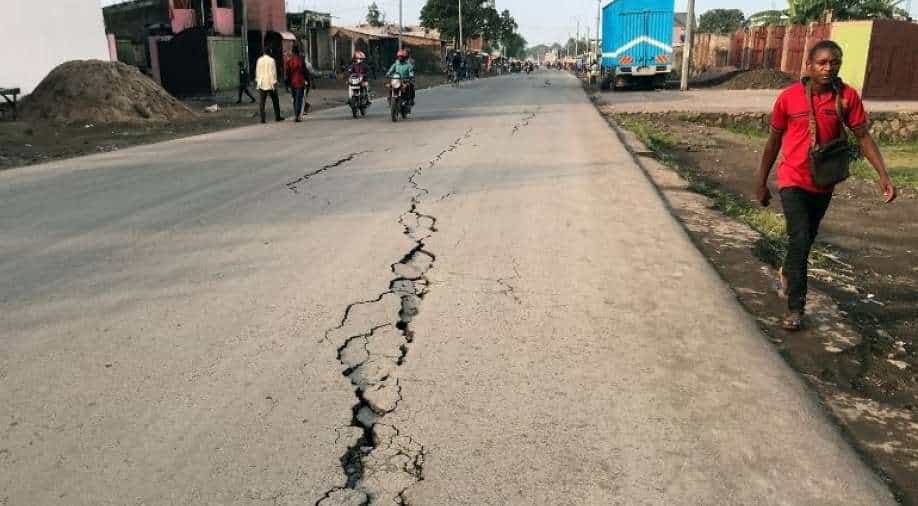 FILE PHOTO: A pedestrian walks near a crack on the road caused by earth tremors as aftershocks following the eruption of Mount Nyiragongo volcano near Goma, in the Democratic Republic of Congo May 26, 2021. Photograph:( Reuters )

Thirty-one people were killed on Saturday evening when Mount Nyiragongo, one of the world’s most active volcanoes

Thousands of people scrambled to flee the Congolese city of Goma on Thursday, some picking their way across landscapes scarred with lava after officials said a second volcanic eruption could happen any time.

Magma, the molten rock that normally stays beneath the earth's crust, had been detected beneath the city and the adjoining Lake Kivu, Constant Ndima Kongba, the military governor of North Kivu province, said, citing seismic and ground deformation data.

"Given these scientific observations, an eruption on land or under the lake cannot be ruled out at present, and it could occur with very little or no warning," he said.

Thirty-one people were killed on Saturday evening when Mount Nyiragongo, one of the world’s most active volcanoes, sent a wall of orange lava downhill towards the city, destroying 17 villages on the way.

The lava stopped just 300 metres short of Goma airport, the main hub for aid operations in the eastern Democratic Republic of Congo. Much of the city was spared but hundreds of earthquakes since have destroyed buildings and opened cracks in the earth.

Ten neighbourhoods in the east of the city, which lay in the path of lava from the previous eruption in 2002, needed to move to Sake, around 13 miles (21 km) to the northwest, Ndima said.

"Evacuation is compulsory. Those who do not adhere swiftly carry unnecessary risks."

Thousands of people heeded his message, filing out of town on foot, with huge bundles on their heads. Others fled by car, creating traffic jams across the city, or on large boats that took them across Lake Kivu.

On the road north of Goma, a stream of people picked their way across a landscape charred by lava still hot from Saturday's eruption, drone video footage showed.

"The first day I didn't move because there were no orders, but today it's different," said Alfred Bulangalire, 42, who was fleeing Goma on foot with his wife and four children.

"I know that my shop will be looted, but I have to protect myself and my family," he said.

A spokesman for the national government said at one point that boat traffic had been banned because Lake Kivu was considered dangerous, but a local governor later said the lake would remain open.

Volcanologists in Goma warned earlier on Thursday that, in a worst-case scenario, a volcanic eruption under the lake, accompanied by a large earthquake, could trigger a sudden release of carbon dioxide from the bottom of the lake.

Such an explosion could asphyxiate thousands of people, they said.

"Faced with this spectrum of dangers ... the only option has been to protect human lives and keep the population out of the path of the lava flows," government spokesman Patrick Muyaya told journalists.

Goma's Heal Africa hospital, which was re-built on hardened lava from the 2002 eruption, has sent its patients to other facilities in town, its director, Serge Kahatwa, told Reuters.

"Other hospitals are full so it's a big problem right now. They are overwhelmed," he said.

Diego Zorrilla, the UN's deputy humanitarian coordinator in Congo, said UN agencies were accelerating plans announced on Wednesday to temporarily relocate around 250 non-essential staff, around half of their aid workers.

Congo imposed martial law on the region earlier this month to try to stem the bloodshed and widespread insecurity many people still face every day, long after the official end of a civil war in 2003.

Around 3,000 houses were destroyed in Saturday's volcanic eruption and more than 20,000 people left homeless. At least 40 people are still missing. 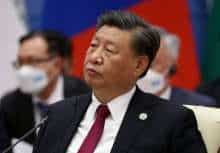