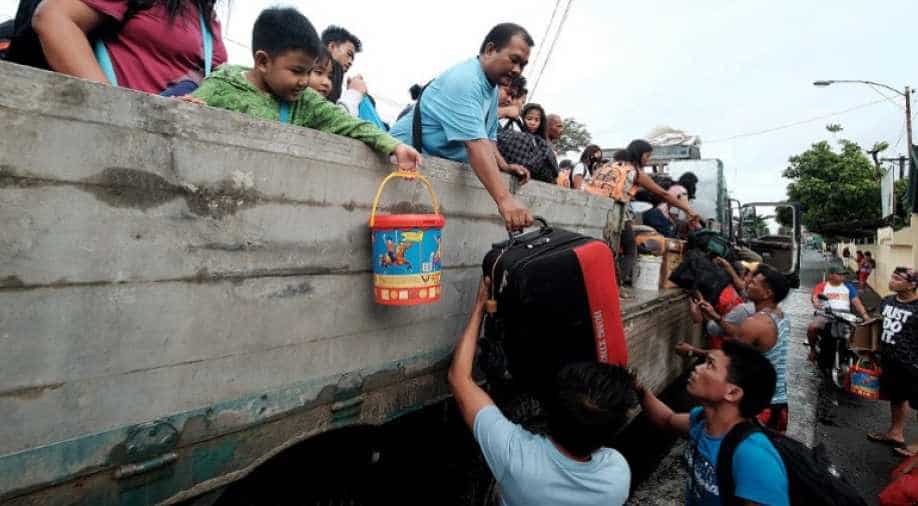 Stranded passengers from Tabaco port are evacuated by the local government in Tabaco City, Albay province on December 24, 2016 after their seafaring vessels were prohibited from sailing ahead of typhoon Nock-Ten's expected arrival. Photograph:( AFP )

Thousands of residents were fleeing coastal and other hazardous areas in the eastern Philippines on Sunday as a powerful typhoon barrelled towards the disaster-prone archipelago.

Officials warned 2.5-metre (eight-feet) high waves and landslides posed the biggest threats as Nock-Ten closed in on the Bicol peninsula and nearby islands.

"We went around with megaphones and gave instructions to our people to eat breakfast, pack and board the military trucks," Alberto Lindo, an official of Alcala, a farming village of 3,300 people near the active Mayon volcano, told AFP.

"There are large ash deposits on the slopes. Heavy rain can dislodge them and bury our homes in mud."

Philippine and international weather services said Nock-Ten, named after a bird found in Laos, was set to hit Bicol on Sunday before reaching the rest of the main island of Luzon on Monday.

The US Joint Typhoon Warning Center has forecast sustained winds of 231 kilometres (144 miles) an hour and gusts of 278 kilometres an hour when Nock-Ten makes landfall.

The typhoon will affect an area populated by nearly 42 million people, including the capital Manila, which was forecast to be hit on Monday.

Civil defence officials in Bicol said earlier nearly half a million people in the region were in harm's way and needed to be evacuated.

The government called for preemptive evacuations in the region on Friday, with nearly 4,000 residents moving into emergency centres and more than 8,000 others seeking shelter elsewhere, according to an official tally.

Evacuations were continuing early on Christmas Day with trucks provided by the military as well as local governments sent to coastal communities and other areas that have been hit by landslides or flash floods in previous storms.

Nock-Ten, which will arrive outside the normal typhoon season, disrupted the celebration of one of the most important holidays in the mainly Catholic country's religious calendar, with all ferry services and some commercial flights suspended.

Some of the thousands of commuters stranded at dozens of Bicol ports that were closed for the typhoon spent the night inside evacuation centres on Friday.

Elsewhere, the coastguard on Sunday ordered the beaches south of Manila to be cleared of holidaymakers by Monday.

"All forms of recreational activity (on the coasts) will be banned," coastguard spokesman Armando Balilo told local broadcaster ABS-CBN television.

He said residents of seaside slums in Manila have also been warned to leave their homes.

Storm surges devastated the city of Tacloban and nearby areas when super typhoon Haiyan struck the central Philippines in November 2013, leaving 7,350 people dead or missing.

An average of 20 storms and typhoons strike the Philippines each year, routinely killing hundreds of people.