They criticized the NYPD. It cost them their jobs. 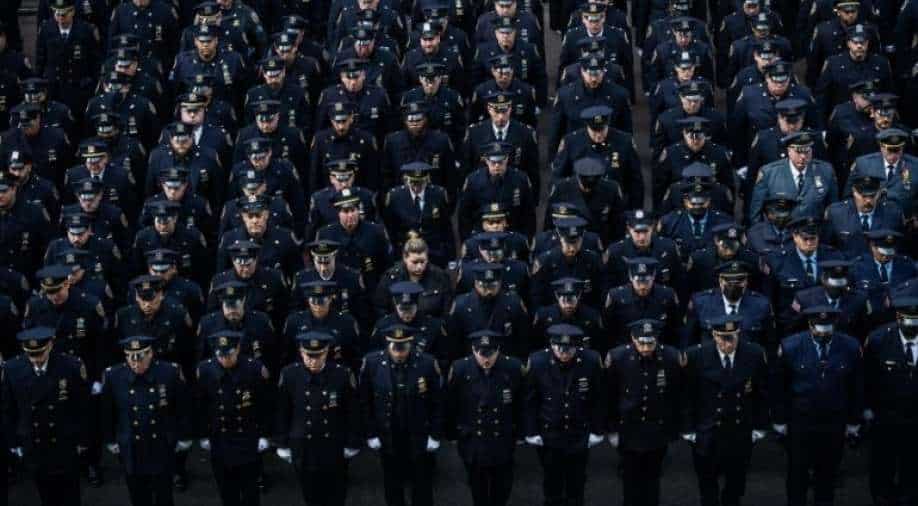 In the aftermath of two police funerals, three New Yorkers — two teachers and an actress — were fired after social media posts. Are we entering a new phase of intolerance?

In the shadow of the Verrazzano-Narrows Bridge, Fontbonne Hall Academy in Brooklyn has not been hit by the forces of cultural change quite as bluntly as so many other private schools, which have spent the past few years embracing increasingly progressive values. Founded in 1937 by the Congregation of the Sisters of St. Joseph, an order devoted to the goal of fostering “love, unity and reconciliation,” the girls’ school professes a commitment to “restorative justice.” But when it had the opportunity to put that principle into practice last week, it chose a less forgiving path.

Responding to the deaths of police officers, Wilbert Mora and Jason Rivera, who were killed in the line of duty in Harlem last month, Fontbonne instituted a “dress down” day, which gave students a reprieve from uniforms — and the option to wear blue in commemoration — as they raised money for the families of the men who were shot. Resisting the effort, a young teacher named Laura Lynne Duffy announced on Twitter that she would be “intentionally dressing up,” adding the hashtags “BLM” and “Abolition” to her post. The next day, the school announced that it was letting her go after “a thorough investigation.”

In private discussions among young alumnae, some took the view that the school had been unduly punitive. But the Facebook page for the Sisters of St. Joseph featured dozens of comments supportive of the school’s decision, with certain posters calling Duffy “hateful,” a “monster” and someone who “should never be allowed to teach ANYWHERE again.” (Neither Duffy nor the various teachers and administrators at Fontbonne responded to repeated requests to talk about what happened.)

The dismissal, one among several, suggests that we may have entered a new phase of intolerance. In the current environment, police unions and their sympathizers in and out of the tabloid press have assumed the role of left-wing ideologues, wielding their power to silence views that challenge a prevailing orthodoxy at a time when crime has been challenging and the police feel as if they are operating amid greater dangers.

As it happened, Duffy was not the only Brooklyn teacher to be fired as a result of critical comments made about the police. Days earlier, Chris Flanigan, who had been working at Coney Island Prep for just a few weeks, was let go after posting an image to his personal Instagram account of a throng of police officers outside the funeral for Rivera with the text: “5/30/20: NYPD SUV drives into a crowd of protesters. Ideal conditions for reciprocity.”

Flanigan was referring to a situation in which a police department vehicle accelerated toward a barricade, knocking people down behind it, in Brooklyn at a demonstration around George Floyd’s murder. Some people interpreted his post as a call for retribution, which makes it harder to defend. Remarking on the teacher’s firing in a statement, Leslie-Bernard Joseph, CEO of Coney Island Prep, a charter school where the majority of students are Black and Latino, said that as public servants, teachers and staff must hold themselves to a “higher standard” and that the school did not “condone or promote violence of any sort.”

But Flanigan claimed he did not condone violence either, that he respected “uniform service” and that he had been trying to suggest — however incendiary his language seemed — that the crowd formation had put the police officers in a vulnerable position. He expressed “deep regret” for his comments and said that he had “incredible respect for Coney Island Prep and the community.” But his rash words now appeared to make him irredeemable.

Had the ideas he registered on Instagram never made their way to a broader audience, the threats and harassment that he and the school ultimately endured might not have come to pass. Flanigan, who had only 400 Instagram followers at the time, put the post up at midnight on a Friday. By 10 the next morning, he told me, after noticing that a few people had taken issue with his sentiment, he removed it. On Saturday night, however, Flanigan received a call from The New York Post, which had got hold of the posting and planned to run an article about it. It went up several hours later, and early Sunday morning, Flanigan alerted his employers.

Although the arts might seem more open to controversial positions, a young actress named Jacqueline Guzman found herself cast aside after she vented and cursed about street closures for police funerals in a since-deleted TikTok video in which she pointed out that “we don’t shut down the city” for those who are killed by the police.

The production company with which she was affiliated, Face to Face Films, quickly let her go. At the same time, Patrick J. Lynch, the head of the Police Benevolent Association, told The New York Post that officers needed New Yorkers who stood with them to “speak up and push back,” adding, “This kind of garbage has polluted the conversation for far too long.”

Of course, police unions function primarily to protect their members from precisely the kind of overreaching disciplinary actions that these three were put through. Although Officer Daniel Pantaleo’s chokehold led to Eric Garner’s death in 2014, he was not fired from the force until five years after the fact.

Just last month, a New Orleans police sergeant won his job back a year after he had been fired for racially inflammatory remarks made on social media following Floyd’s murder. One called demonstrators “animals,” whom he would run over if he felt necessary. He suggested that this betrayed no bias because he would react this way to anyone demonstrating in a threatening manner.

In the end, his termination was downgraded to a suspension.