The year of the wedding after-party 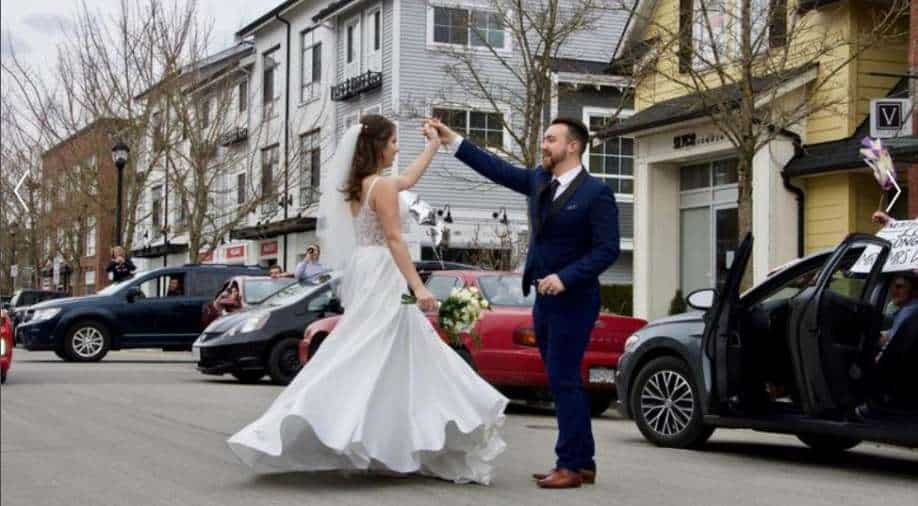 According to a recent survey by the Knot, 32% of couples who planned to marry in 2020 pushed their receptions to 2021 or later. And a third of newlyweds who had both a ceremony and a reception last year plan to have another, larger celebration in the future.

COVID-era newlyweds who pared down their guest lists and exchanged vows via live stream are planning full-on second weddings. But with those plans come an awkward set of etiquette questions. Is it OK to ask virtual guests to attend an in-person reception a year later? Should you expect gifts? And what do you name this event? A vow renewal? An anniversary reception? A sequel?

After calling off plans for a big wedding last May, Erin Wronka, 27, sprinted to organize a 20-person ceremony in July in Tampa, Florida, where she grew up. Sixty guests joined on Zoom. Now, she and her husband, Michael Baldwin, 26, are planning a 120-person reception at their original venue, the Manor in West Orange, New Jersey, on Aug. 13. She’s been calling the party “Part Two.”

“When we were going to tell our family about the new date, we were like, ‘They’re going to laugh at us,’” Wronka, a public relations executive in Clark, New Jersey, said. “They’re going to think we’re so annoying. They just celebrated us.”

But the couple knew the delayed reception was right for them. “One day we could tell our kids this: how we got married in a pandemic and got to party twice,” she said.

According to a recent survey by the Knot, 32% of couples who planned to marry in 2020 pushed their receptions to 2021 or later. And a third of newlyweds who had both a ceremony and a reception last year plan to have another, larger celebration in the future.

While the etiquette of these post-pandemic receptions is unsettled, wedding planners and couples alike say these events provide an opportunity for loved ones to gather without the pressure of a wedding.

“If something goes wrong, it’s not like, ‘Oh my God, the wedding day, the most important day of our lives is ruined,’” said Elizabeth Hilbert, a product marketing manager in San Diego. “We’re married. We’re just here for a good time.”

Hilbert, 26, and her longtime partner, Anish Tondwalkar, 26, a software engineer, married in a Hindu ceremony in December in the living room of the groom’s parents. Only immediate family members attended; their grandparents watched via Zoom. They are planning a reception close to their first anniversary, although they may postpone depending on pandemic conditions.

If you’re wondering whether to have a post-COVID wedding blowout, here are some things to keep in mind.

Many couples are planning a reception on their first wedding anniversary. “It almost reminds me of a first birthday party,” said Kim Forrest, a senior editor at WeddingWire. “There’s such a big deal about that first year.”

An anniversary party can include some of the traditions of a typical reception, but it doesn’t have to. “This is the couple’s opportunity to be creative in whatever way they want,” said Dayna Isom Johnson, a trend expert for Etsy. “It’s really just about how they can bring their love story back to life and celebrate it with their friends and family.”

Consider writing new vows for a vow renewal, or simply presenting a recap of your wedding. “We do have some couples who will be debuting their wedding video from the ceremony that took place last year so that guests can be a part of the original moment,” said Kate Murtaugh, a wedding planner and event designer in Boston area.

And if you missed out on rituals like the first dance or cake-cutting, don’t be afraid to incorporate or remix them in the reception, like with an anniversary cake topper.

If you got married in private, without friends and family tuning in remotely, you have more options. Enter the sequel wedding.

This tradition is nothing new. In some countries where civil ceremonies are required, like France and Mexico, it’s common to have a symbolic ceremony and reception after the couple has been legally married.

Allison and Connor Weins married last September at Novelty Hill-Januik Winery in Woodinville, Washington. A friend officiated, and two other friends witnessed. Their 100-person wedding in Seattle will take place Sept. 5, the day before their first anniversary, with both a ceremony and reception. (COVID restrictions could dictate a smaller guest list.)

“The advantage of doing the elopement was that we did not have to worry about our parents being in the room, so we could say vows that were maybe a little bit funnier,” Connor Weins, 29 and a software development manager, said.
But it was no replacement for a full wedding. “I still haven’t gotten a chance to wear my wedding dress, which is actually a key thing I’m most disappointed about,” Allison Weins, a 28-year-old product manager, said. “We are still planning to do the walk down the aisle and do first looks and have a more family-friendly set of vows. Because I do think the joy of having a wedding is it’s not only about commemorating the relationship that we have but all the people who have helped us become who we are, who will support us in the future.”

If you’ve already sent out multiple save-the-date and change-the-date cards, it can feel awkward sending more notices. “Everyone was starting to make fun of us. They’re like, ‘Our whole fridge is you guys,’” Wronka said. “I was like, we can’t send another piece of mail.” She opted to send digital invitations, with paper invitations to come a few months before the reception.

Couples should be open and honest with guests. “These are the closest people to you,” Johnson at Etsy said. “These are people you can openly communicate with.” The medium, she said, isn’t as important as giving people “the lowdown of where you guys are and what the next steps will be.”

For anniversary receptions, Forrest recommends sending printed invitations to match the event’s importance, “and just skipping the language that refers to a ceremony.”
Gift-giving etiquette depends on your original plans. Did you already have a registry for a postponed or cancelled wedding? It’s fine to keep those gifts, but don’t create an expectation for guests to gift twice. “It’s completely up to the attendees if they want to gift more than just that first time,” Johnson said.

And, if you’re wondering whether it’s OK to require guests to be vaccinated: “It’s really whatever the bride and groom are comfortable with. They’re the boss,” said Christian Weiler, an owner of Epic Events, a wedding and event planning company in greater San Diego. “So anything they want is appropriate.”

Attire and Other Details

Anniversary receptions are “going to run a little bit more on the casual side,” Forrest, of WeddingWire, said. “It could be a great opportunity to choose something more fashion-forward.” This might include a bridal jumpsuit or a shorter dress.

Decorations, too, can be less formal. “We’re going to see really unique and interesting décor come out of these anniversary receptions and sequel weddings because it’s all about having fun and celebrating,” Forrest said. “Brighter colours exaggerated florals, really cool lighting.”

Consider getting creative with paper, the classic material used to mark first anniversaries. “It’ll be interesting to see how couples can incorporate that material into the celebration,” Johnson said.
You Can Still Cancel

Even as Americans slowly get vaccinated and prepare to re-enter society, it’s far from clear when parties as we once knew them will be safe. If the uncertainty makes you uneasy, you can still plan a wedding that replaces the need for a reception.

“We’re really anxious that this September is still not going to be safe,” Weins said. “And the thought of pushing it again just feels like stringing all our friends along.” If they have to call it off, they plan to rent out bars and throw a series of mini receptions in different cities. “We call it our wedding roadshow,” she said.

Last June, Anne-Marie Hantman, 31, and Rohan Thakkar, 32, hired a videographer to stream their Hindu and Christian ceremonies to an audience of more than 500, with group chats and FaceTime calls with family and the bridal party throughout the day.

Hantman, a higher education administrator, and Thakkar, a business systems manager, kept thinking they would eventually host a reception in person. But with no end to the pandemic insight, planning anything felt impossible.

It also felt unnecessary; the couple had gotten everything they wanted from their live-streamed event. “We got married in a beautiful, unique way,” Thakkar said. “And folks were still raving about how much fun they had.”