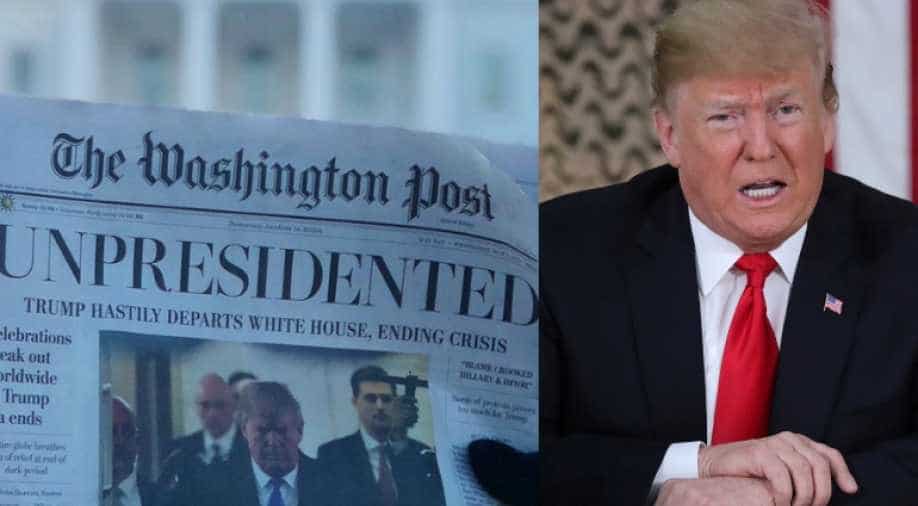 The spoof paper with a dateline of 1 May 2019 had striking similarities with original newspaper and is filled with anti-Trump and women empowerment stories.

Fake editions of US-based newspaper 'The Washington Post' with a bold headline reading Trump 'unpresidented' was circulated at multiple locations around Washington DC on Wednesday.

The "spoof paper" with a dateline of May 1st, 2019 had striking similarities with the original newspaper and was filled with anti-Trump and women empowerment stories.

Fake @washingtonpost issue is being distributed today with the headline UNPRESIDENTED. My colleague .@davpjor received a copy on Capitol Hill this morning. We too were initially told @MoveOn was responsible, but they have since said they were not. https://t.co/ZLO9aehDat pic.twitter.com/PbKaFfMzDe

The paper's lead story with bold capital letters "unpresidented"  said that Trump had resigned from the president's post.

According to the spoof paper story, Trump left his resignation on a napkin in the Oval Office and left Washington for Yalta, the Crimean resort that was the site of a meeting of allied leaders during World War II.

The fake story also reported that the resignation was triggered by the massive "woman-led protests" across the country.

The paper also said that after Trump's resignation, Mike Pence was sworn in as President.

The paper's stories and the PDF of the spoof newspaper were also published on a website that also imitated the Washington Post's homepage. The site reportedly has been taken down now.

A group called, "Trickster activist collective" later in the day revealed that they were behind the prank newspaper.

This is not the first time the group did something like this. In 2008 they had published a spoof copy of The New York Times with the headline in the front page reading, "Iraq war ends".

In 2009 as well they had published a fake edition of The New York Post.

There are fake print editions of The Washington Post being distributed around downtown DC, and we are aware of a website attempting to mimic The Post’s. They are not Post products, and we are looking into this.