The SCO Summit: A growing coalition of ?Frenemies?? 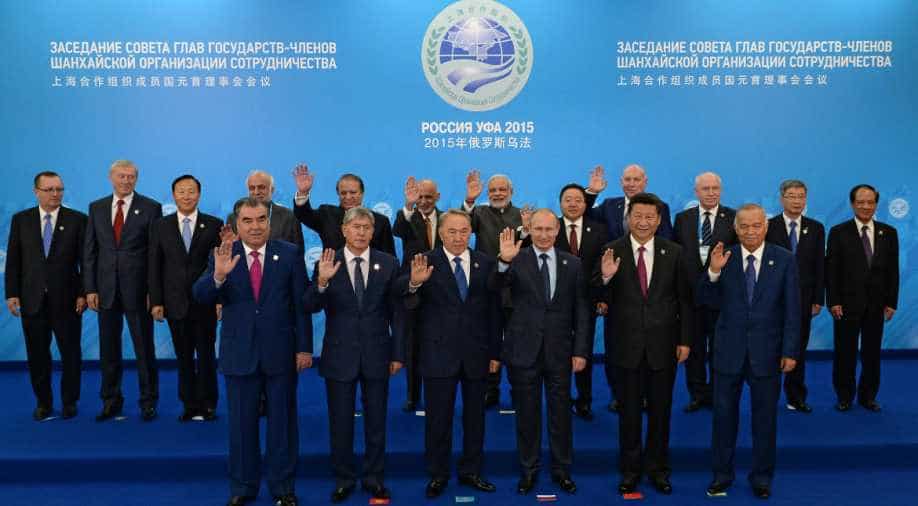 SCO member states have already instructed India and Pakistan to keep their differences aside in the spirit of the SCO Charter Photograph:( Others )

To its Western detractors, the Shanghai Cooperation Organization (SCO) is an emergent anti-NATO coalition, “an OPEC with bombs” and a military and economic alliance to be reckoned with.

To its Eastern proponents and supporters, the SCO is a military and economic coalition of mostly Central Asian countries (Russia, China, Kazakhstan, Uzbekistan, Kyrgyzstan and Tajikistan), which after the expected inclusion of India and Pakistan as full members at the grouping’s annual summit in Astana today, would make it represent half the world’s population and almost 20 per cent of its GDP.

Founded in 2001, the alliance’s three stated aims are to fight terrorism, extremism and separatism. In addition, members of the group also engage in economic and scientific cooperation.

But all eyes today, along with a few raised eyebrows, will be fixed on the admission of India and Pakistan as full member states into the SCO. Although chances of a meeting between Indian Prime Minister Narendra Modi and the Pakistan premier at the summit appear bleak, there are reports that a head-to-head between Mr Modi and the Chinese President Xi Jinping could be the highlight. India is understandably less sanguine about its role in the coalition, thanks to the growing clout of some of its ‘frenemies’ in the bloc.

One of the stumbling blocks which India will likely face is the SCO member states’ expected endorsement of China’s Belt and Road Initiative (BRI) which connects it to Europe and Africa and covers nearly 70 countries through a series of trade pacts. Delhi believes the BRI violates its sovereignty, particularly the proposed China-Pakistan

Economic Corridor (CPEC), which runs through Pak-occupied Kashmir and Gilgit-Baltistan region (both an integral part of the Indian state of Jammu and Kashmir). It should be noted that India did not participate in the BRI summit held in Beijing in mid-May, which drew 30 heads of state.

Again, there are differing views on terrorism and territoriality between India on the one hand, as well as China and Pakistan on the other. Beijing still considers the Indian state of Arunachal Pradesh a disputed territory, remains adamant on preventing Masood Azhar’s naming in the UN sanctions list and obstructs India’s entry to the Nuclear Suppliers Group (NSG). Therefore, some Indian strategists contend that becoming part of the SCO and the so-called consensus-driven ‘Shanghai Spirit’, could potentially imperil India’s vital interests.

There are also concerns that India-Pakistan disputes at the forum could render the bloc flaccid (SAARC serves as the precedent) and for this reason, SCO member states have already instructed the two new entrants to keep their differences aside in the spirit of the SCO Charter, which prohibits the raising of bilateral issues. Thus, Chinese foreign ministry spokesperson Hua Chunying has reportedly said: “Hope India and Pakistan strictly follow the charter of the SCO and the idea of good neighbourliness to uphold the SCO spirit, improve their relations and inject new impetus into the development of the SCO.”

Some Indian experts fear that the strong Chinese and now growing Russian ties with Pakistan will not allow them to take the Islamic Republic to task for its increased support to cross-border terrorism and separatism in Jammu and Kashmir, but instead may use the SCO to force India into negotiating with Pakistan on Kashmir in the context of ‘good-neighborliness’.

In spite of these issues, India would benefit from greater connectivity and influence with Central Asian countries, and this development is likely to facilitate a Free Trade Agreement with European Economic Union (EEU), enabling an easy flow of raw materials, goods, finance and technology.

Again, the opening of the International South Transport Corridor (INSTC) — the 7,000 km long network of ship, rail and road route for moving goods connecting India, Russia, Iran, Europe and Central Asia — and the proposed Chabahar project in Iran would get a boost by India’s joining the coalition.

Even more important, India might gain from SCO’s Regional Anti-Terrorist Structure (RATS). In March this year, the anti-terror charter of SCO was bolstered when officials of special services of member states approved a draft convention on combating extremism and terrorism at a meeting in Tashkent. Again, the participation in SCO’s counter-terror exercises and military drills with member countries could prove useful for Indian forces. However, it is difficult to foresee India and Pakistani forces participating in bilateral anti-terror exercises under the SCO ambit. India could also benefit from an SCO ‘Energy Club’, particularly when Iran would likely join the grouping at a later date.

The SCO could also provide an opportunity to India to establish stronger ties with other Central Asian countries, for example with Uzbekistan and Kazakhstan, to circumvent the influence of China-Pakistan alignment that could impede India’s direct access to Eurasia.

Some Western observers believe that Russia is trying to take advantage of India-China rivalry by getting India inducted into the SCO. It is contended that Moscow is wary of Beijing’s growing clout within the bloc and in a region that Russia views as its backyard. Some observers see signs of Russian unease with growing Chinese investment in Central Asia and reduced economic dependence of the region on the Russian largesse. It is in this context that Russia is said to have objected to any free trade agreement among the SCO members and wants the entry of India — with its large economic mite — to mitigate growing Chinese influence.

Thus, the inclusion of new members into the SCO could make the organisation stronger by virtue of more resources (people and aggregate GDP), but could also make it more vulnerable given the divergence of security and economic interests among its member states.

Dr Adil Rasheed is Research Fellow with Institute for Defence and Strategic Analyses (IDSA) and is the author of the book ISIS: Race to Armageddon.