The inmate and the officer: Alabama's improbable prison escape 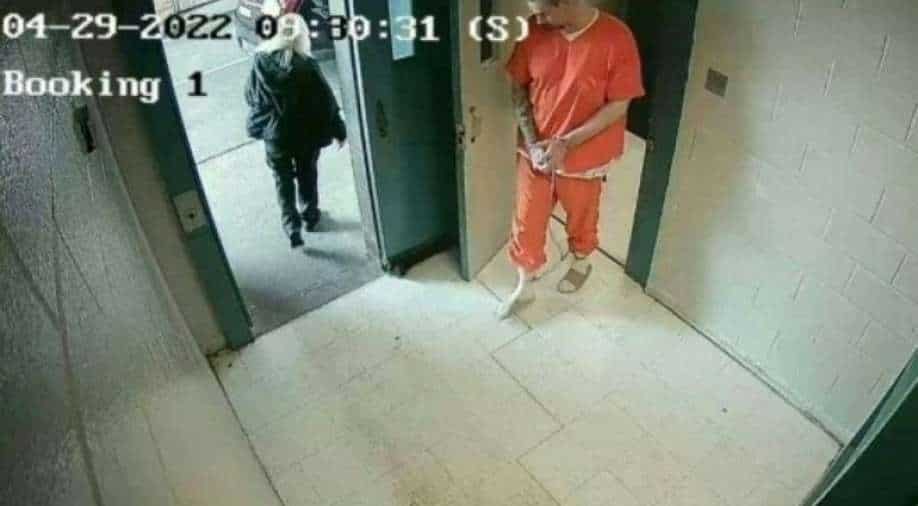 An "extremely dangerous" murder suspect and the female corrections officer who US authorities say helped him escape from jail were carrying on a "special relationship," officials said. Photograph:( AFP )

The prisoner, Casey White, the two are not related has had numerous run-ins with the law, and has been sentenced to 75 years imprisonment for kidnapping, burglary and attempted murder, among other crimes

A guard with a spotless record and a convict accused of murder this unlikely pair has vexed US law enforcement for days as they investigate an Alabama prison break seemingly planned down to the last detail.

The guard, Vicky White, had never before caused trouble at the jail in Florence, a small town in the southern US state.

The prisoner, Casey White, the two are not related has had numerous run-ins with the law, and has been sentenced to 75 years imprisonment for kidnapping, burglary and attempted murder, among other crimes.

Also read | Even as US introduces gender-neutral passports, these states still have archaic anti-transgender laws

Their story began in 2020, when Casey White, already in custody at a state prison, confessed to murdering a woman five years earlier.

His admission was short-lived -- he eventually pleaded not guilty in the case, which is still ongoing -- but as a result he was transferred to a jail in Lauderdale County.

That is where he met Vicky White for the first time, according to Sheriff Rick Singleton.

While Casey White was in Lauderdale County Jail, law enforcement were tipped off about a potential escape plan -- they searched his cell and found a weapon.

He was immediately sent back to state prison, but the two kept in touch.

"He said he had a pen pal, but I had no idea who it was," Casey White's mother Connie White told the New York Post.

She maintains her son never killed anyone, and that his confession was false, only made to force a change in his living arrangements.

"He just wanted to be out of that prison because it was so bad," she said.

The 38-year-old was nevertheless charged with the killing, and two years later found himself back at the county jail in Florence to attend a nearby court hearing for the case.

That was in February. In the intervening months, until his escape on Friday, the detainee continued to benefit from a relationship with Vicky White.

"We don't have any evidence of any physical relationship," Singleton noted, but other prisoners have told of "special privileges" afforded to Casey White.

"She was doing special things for him that other inmates didn't get," Singleton said.

Now, that same prisoner is on the run, and law enforcement says he is armed and "extremely dangerous."

Casey White's mother said her son "is not the monster they are making him out to be, at all" -- but a former girlfriend told a local television station "Casey White is very dangerous."

"He's dangerous to everybody that is around him," she said, offering advice to Vicky White, if the two are indeed on the run together.

"Get the hell out," the former girlfriend warned. "Do the right thing before you lose your life or before somebody else does."

Vicky White was a "model employee," according to Singleton. The county's district attorney, Chris Connolly, called her "the most solid person at the jail."

She never displayed any hint that something was amiss.

Last month, 56-year-old Vicky White moved in with her mother, after selling her own house for $95,000 -- less than the asking price -- and announced her retirement.

Her last day at work was Friday, when she fabricated a court-ordered psychological evaluation for Casey White.

She said she needed to drive him to the appointment.

The two never returned, and authorities realized they had disappeared that afternoon around 3:30 pm.

Vicky White's mother Pat Davis was in "disbelief" over the incident.

"I thought at first it was a mistake," she said.

Nothing in the jail's surveillance footage from the escape offers any clues that the prisoner and the guard were in cahoots.

In the video, she holds the door open for him, but doesn't seem to give him a passing glance until he climbs into the backseat of a sheriff's car, hands and feet shackled.

She is seen walking around to the front, getting into the driver's seat and pulling away, around 9:30 am.

Casey White and Vicky White were last seen that same day, riding in a rust-colored Ford SUV some 25 miles (40 kilometers) away from the jail.

"I'd be surprised if they're still in Alabama," Sheriff Singleton said.

Authorities have offered up to $15,000 for information leading to the runaways' capture.