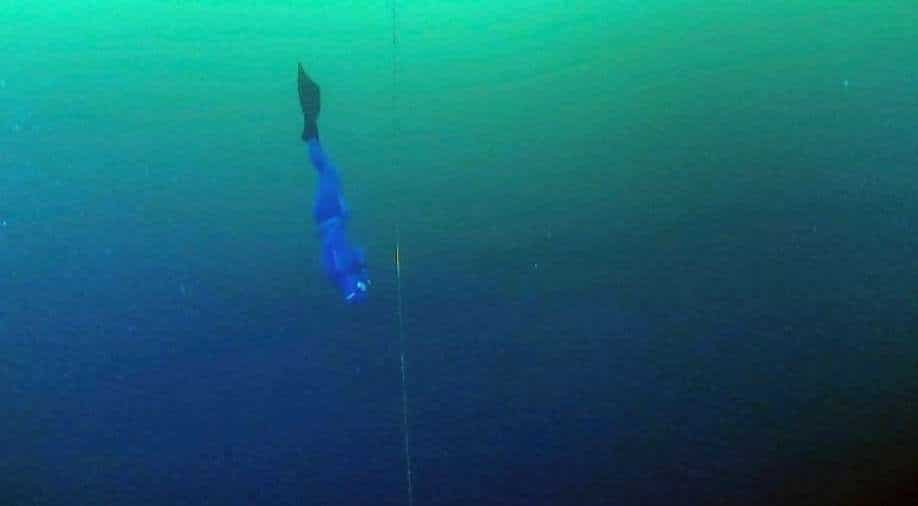 Dressed in a thick, blue wetsuit and gloves, he slid into a monofin then slipped into a 3-foot-square cut in the ice, where he clipped onto a thin rope that disappeared into the inky water.

When the champion free diver and multiple world-record holder Alexey Molchanov stepped onto the streaked ice on Lake Baikal in southern Siberia on March 16, the sky was cobalt blue. The sun illuminated the surrounding mountains; the wind was light and the air a balmy 14 degrees Fahrenheit (minus 10 Celsius).

It was the perfect day for a swim.

But this wasn’t the typical polar-bear plunge. Molchanov, 34, hoped to swim 80 meters, or approximately 262 feet, beneath the meter-thick icy surface and back up on a single breath. In the process, he would break yet another world record.

Dressed in a thick, blue wetsuit and gloves, he slid into a monofin then slipped into a 3-foot-square cut in the ice, where he clipped onto a thin rope that disappeared into the inky water.

He deployed a technique that his mother, Natalia Molchanova (the most decorated free diver of all time), first developed and taught, and Molchanov has taken worldwide. She called it deconcentration. Instead of taking in the scene, he detached from it, both visually and psychologically.

He focused on taking long, deep, rhythmic breaths until his heart rate slowed and he entered a meditative state. Then he sipped the air through pursed lips until his lungs were fully inflated, from his diaphragm to the tiny air pockets between and behind his shoulder blades. Finally, he ducked below the surface and disappeared.

Nearly 100 spectators and a throng of Russian news media waited on the surface above him.

This dive was more difficult than most. His wetsuit was seven times thicker than normal, which made it more challenging to kick against the positive buoyancy found in the first 10 meters (33 feet) of depth.

All that effort demanded he tap into his finite supply of oxygen. To keep warm, he wore a mask, something he typically avoids on deep dives, which meant he had to hold his nose between his thumb and forefinger to equalize instead of relying on a nose clip. Plus, cold water makes equalization of the sinuses, when a diver funnels air into the sinuses to keep them pressurized to prevent head pain and injuries such as burst eardrums, extremely challenging.

Within 20 seconds, he had reached 20 meters (66 feet) and puffed his cheeks out to create a vacuum for the remaining air in his lungs to fill. On typical dives, he stores this “mouth-fill” and uses it to equalize without having to worry about leaks. But in water that was 1 to 2 degrees Celsius, his lips numbed quickly, and he had to clamp them shut with his fingers, his thumb and forefinger on his nose, his middle and ring fingers on his lips.

On the slow drop toward 80 meters, the sound of crackling ice rippled through the water, the barometric pressure cranked up, and it was painfully cold. His job was to accept it all and remain relaxed no matter how awful it felt or what happened next.

He arrived at the illuminated bottom plate, grabbed a black tag and, with an ever-dwindling oxygen supply, dolphin-kicked back toward the hole in the ice.

For the past four years, Molchanov has been the undisputed best all-around free diver in the world. He came of age traveling the world, from competition to competition, with his mother, who set 41 world records and won 23 world championship titles, despite not discovering the sport until after she divorced at 39 years old. She never sought sponsorship and supported her family by teaching the sport she loved.

By the time she disappeared while free diving near Ibiza in 2015, her curriculum was being taught across Russia and Eastern Europe, and Molchanov already had one depth record and multiple world championships to his name. He had also started manufacturing free-diving gear under the Molchanovs brand. But with his mother gone in a tragic flash, many free divers wondered if he’d unravel. And what would become of the brand that carried her name?

Molchanov did not share his pain. He didn’t seek therapy or confide in anyone, including his older sister, Oksana Molchanova, which concerned her. She’s also a free diver and an instructor, but for two years after her mother’s death, she avoided the water. Molchanov dived more often and brought his mother’s free-diving curriculum across the globe. The ocean became his grief counselor.

“The water, free diving was the way for me to cleanse and recover,” he said. Being underwater allowed him to connect with his mother while also letting go. “It’s thinking about this connection, and it’s also about not letting the tension and all the negative emotions settle in the body.”

The records started piling up quickly. Two years after his mother’s death, in 2017, Molchanov won Vertical Blue, the Wimbledon of free diving, for the first time. The following year, he broke two depth records at the same competition in Dean’s Blue Hole, home training ground of his greatest rival, William Trubridge. In 2018, he broke his own Constant Weight record, by diving to 130 meters and back with a monofin, and he nabbed Trubridge’s Free Immersion world record, by pulling down a line to 125 meters and back again.

Most professional divers take a break from pushing their limits each winter. But Molchanov is not like most divers. So, in February 2020, he found his latest challenge in ice diving and set a world record there too, covering 180 meters (591 feet) in a feat of distance, not depth, under the ice in a quarry on the outskirts of Moscow.

He’s not the first prominent free diver to take to the ice. In early 2019, the German champion Anna von Boetticher slipped into a hole beneath an iceberg off eastern Greenland and explored its craggy underbelly.

Around that same time, Ant Williams, an Australian free diver, and his team took to snowmobiles in the remote north of Norway, where they cut a hole and dropped a line in a deep lake. Williams swam to 70 meters (230 feet) and back to claim his first world record: the record Molchanov aimed to break last week.

“Free divers like exploring their physical and mental limits,” von Boetticher said. “We like challenging ourselves. We are full of curiosity in what we can do, what else we can experience, and cold water is a very intense experience.”

On March 16, Molchanov felt heavy as he kicked back toward fresh air. The drag of the thick wetsuit limited his flexibility and made it harder to execute a fluid dolphin kick. “It took more work to go up,” he said. That triggered an animalistic impulse to kick harder, but he knew any extra effort would come at an oxygen expense he couldn’t afford. “My focus was not to accelerate. I was trying to preserve oxygen. Not start burning it faster.”

He kicked with calm force as he swam past a technical diver at 45 meters (148 feet). When he reached 30 meters (98 feet) he met his first safety diver, followed by another at 20 and a third at 10. The safety divers monitored Molchanov’s eyes and his form: If he slowed or lost motor control or consciousness, it was their job to swim him to the surface where an ambulance was waiting on the ice.

With buoyancy back on his side, he floated to the surface after a dive of 2 minutes, 53 seconds. He’s used to much longer and deeper dives, but when Molchanov grabbed the line, he felt spent and breathed heavily as he flashed the tag from the bottom plate, removed his mask and presented an OK sign to the judge, who in turn offered a white card — confirming a successful dive and Molchanov’s 20th world record.

As usual, Molchanov didn’t cause a fuss. The deepest diver in the history of free diving had done it again.