'Thar she blows!' Scientists use drones to monitor whale health 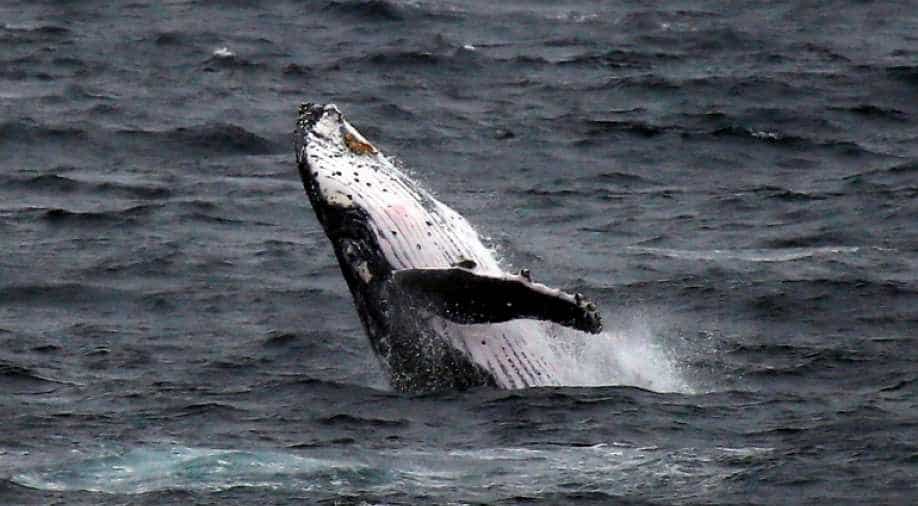 File photo of a humpback whale breaches off the coast at Clovelly Beach in Sydney, Australia. Photograph:( Reuters )

Marine researcher Vanessa Pirotta of Sydney's Macquarie University, says a drone has been used for the first time to collect whale mucus from humpback whales at sea in a technique that could help monitor the health of whales around the world.

The old cry of sailors sighting a whale's waterspout is taking on new meaning as scientists turn to drones, or unmanned aerial vehicles, to gather samples of the fluids exhaled by the huge mammals and track their health.

Marine researcher Vanessa Pirotta of Sydney's Macquarie University, says a drone has been used for the first time to collect whale mucus from humpback whales at sea in a technique that could help monitor the health of whales around the world.

"We're collecting...that visible plume of spray rising from the whale's blowhole, as they come to the surface to breathe," she told Reuters Television.

"This approach may ultimately enable a better understanding of the patterns and drivers of disease emergence in wild populations," Pirotta and eight co-authors say in a paper published in an online open-access journal, Viruses.

The scientists collected whale blow samples from 19 humpback whales during the 2017 annual northward migration from Antarctica to northern Australia, they added.

The spray is collected in a petri dish attached to the top of a quadcopter drone, with a flip-lid opened by the craft's pilot as the drone flies above the whale.

The method is less invasive than using a boat to get close and collecting samples on a pole, Pirotta said and represents an advance over past techniques that depended on samples from stranded whales or those killed for the purpose.

The whale spray collected by a drone contains DNA, proteins, lipids and types of bacteria.

"We can collect bacteria, in my case, to look at the types of bacteria living in whale lungs for an assessment of whale health," Pirotta said.

In this way, drones serve as an early-warning detection system to monitor potential changes in whales' health.

"We can adapt this method to other whale populations around the world not doing so well, like the North Atlantic right whale," Pirotta added.

An international ban on whaling took effect in 1986, but Japan, which says eating whale is part of its culture, last year said it would resume commercial whaling from July in its waters and exclusive economic zone.