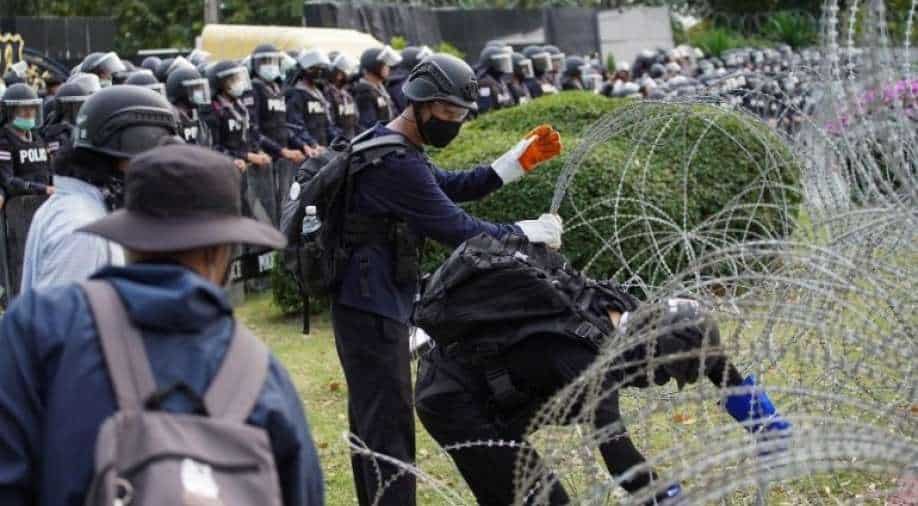 Protesters try to remove barb wires ahead of a pro-democracy rally demanding the prime minister to resign and reforms on the monarchy, in front of 11th Infantry Regiment, in Bangkok, Thailand, November 29, 2020 Photograph:( Reuters )

Anti-government protesters in Thailand on Sunday challenged King Maha Vajiralongkorn's control over army units in the country, triggering a larger debate over the military’s control

Anti-government protesters in Thailand on Sunday challenged King Maha Vajiralongkorn's control over army units in the country, triggering a larger debate over whether the king should have any military’s control at all.

In fact, Thailand’s constitution effectively bans insulting the monarchy. On Sunday, hordes of protesters convened to march to the 11th Infantry Regiment - one of the two units that came under the king’s control in 2019.

"An army should belong to the people, not the king," Parit "Penguin" Chiwarak told reporters. "In a democratic system, the king is not responsible for directing command of the military”, the protester added.

According to the protesters, the monarchy has controlled the military and continues to dominate it.

Protests in the country began in July to demand the ousting of Prime Minister Prayuth Chan-ocha, a former junta leader.

The protesters also demanded a fresh constitution, and have now moved on to demanding a cap on the powers exercised by the king. Protesters were seen removing razor wire barricades across the barracks.

The PM has repeatedly rejected demands of protesters. Many protesters believed that he held on to power by engineering an election last year.

No comment from the Royal Palace has been made so far. But the king said that the protesters continued to be loved by them “all the same”.