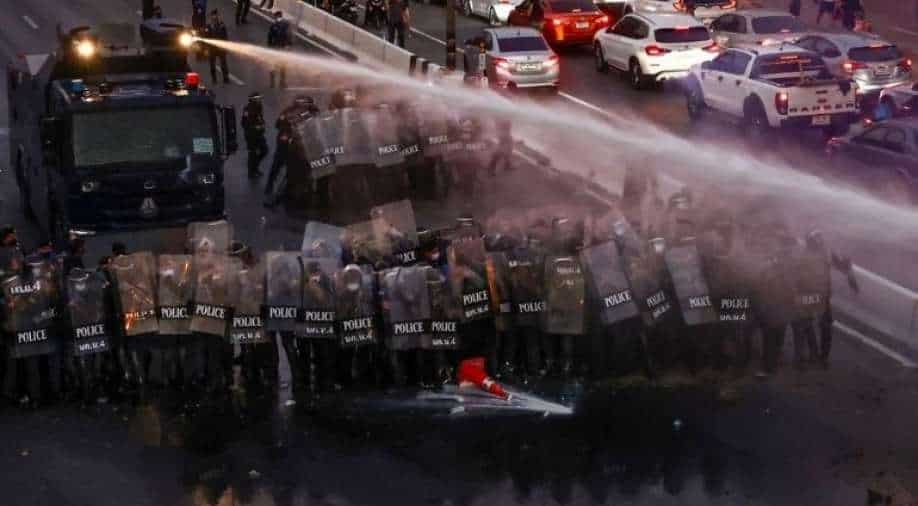 A water cannon truck is deployed by the police to disperse pro-democracy protesters marching toward the residence of Thailand's Prime Minister Prayut Chan-O-Cha in Bangkok Photograph:( AFP )

Thai police used tear gas and water cannon against protesters marching on a military base in Bangkok on Sunday to call for King Maha Vajiralongkorn to give up direct command of the army unit housed there.

A youth-led protest movement calling for the resignation of Prayut Chan-O-Cha's government has lost steam in recent months following a second wave of coronavirus infections in the country. But the recent detention of four prominent protest leaders on royal defamation charges has given it a shot in the arm.

The four are among 58 protesters facing lese majeste charges and the prospect of up to 15 years in jail per charge if convicted of insulting the monarchy.

An estimated 2,000 demonstrators marched from the major Bangkok intersection Victory Monument on Sunday to a nearby military barracks where Prayut lives.

Among the protesters were scores of Myanmar migrant workers rallying against the coup that ousted civilian leader Aung San Suu Kyi in the neighbouring country at the start of February.

Protesters threw bottles at police and marched right up to a barricade of shipping containers and barbed wire at the entrance to the base of the first Infantry Regiment in Bangkok, one of several army units that the government of Prime Minister Prayuth Chan-ocha transferred to the king's control in 2019.

The Thai youth-led political movement rose up last year to demand Prayuth's resignation and broke taboos by calling for reforms of the monarchy.

Protesters also showed support for anti-coup demonstrations in Myanmar, which has been in chaos since the army seized power and detained elected government leader Aung San Suu Kyi.

Thailand's pro-democracy movement kicked off last July and at its peak attracted tens of thousands of mostly young people.

Among the movement's demands are a rewrite of the army-drafted constitution and reforms to the monarchy -- a taboo-smashing demand in a country where the ultra-wealthy royal family has long been untouchable.