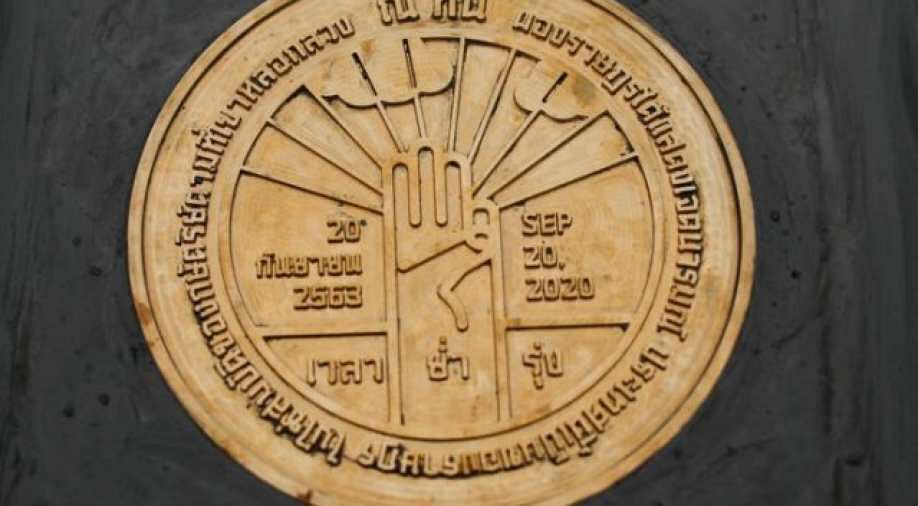 The plaque was placed on Sunday after a weekend rally by tens of thousands of people who cheered calls for reforms to the monarchy of King Maha Vajiralongkorn.

A plaque placed by Thai pro-democracy protesters near the Grand Palace in Bangkok that declared that Thailand belongs to the people and not the king has been removed.

The plaque was placed on Sunday after a weekend rally by tens of thousands of people who cheered calls for reforms to the monarchy of King Maha Vajiralongkorn.

It was, however, not removed by the police.

"I’ve received a report that the plaque is gone but I don’t know how and I don’t know who did it," Bangkok’s deputy police chief Piya Tawichai told Reuters.

"Police are checking with the BMA (Bangkok Metropolitan Administration) and checking who took it out as the plaque is part of the evidence to charge the protest group (for this wrongdoing),” Piya said.

After the protest, people had queued up to take pictures next to the plaque, which also features a hand giving the three-finger salute adopted by pro-democracy protesters.

Protesters have grown ever bolder during two months of demonstrations against Thailand`s palace and military-dominated establishment, breaking a longstanding taboo on criticising the monarchy - which is illegal under lese majeste laws.

Shortly after sunrise on Sunday, protesters had cemented a plaque near the Grand Palace in Bangkok in the area known as Sanam Luang, or Royal Field.

It read, "At this place the people have expressed their will: that this country belongs to the people and is not the property of the monarch as they have deceived us."

Protests that began on university campuses have drawn increasing numbers of older people. That includes red shirt followers of ousted populist prime minister Thaksin Shinawatra who had clashed for years with pro-establishment yellow shirts before Prayuth seized power in 2014.

Protesters say the constitution gives the king too much power and that it was engineered to allow Prayuth to keep power after elections last year. He says that vote was fair.

The next protest is scheduled for Thursday. Protest leaders called on Thais to take Oct. 14 off work to show their support for change.