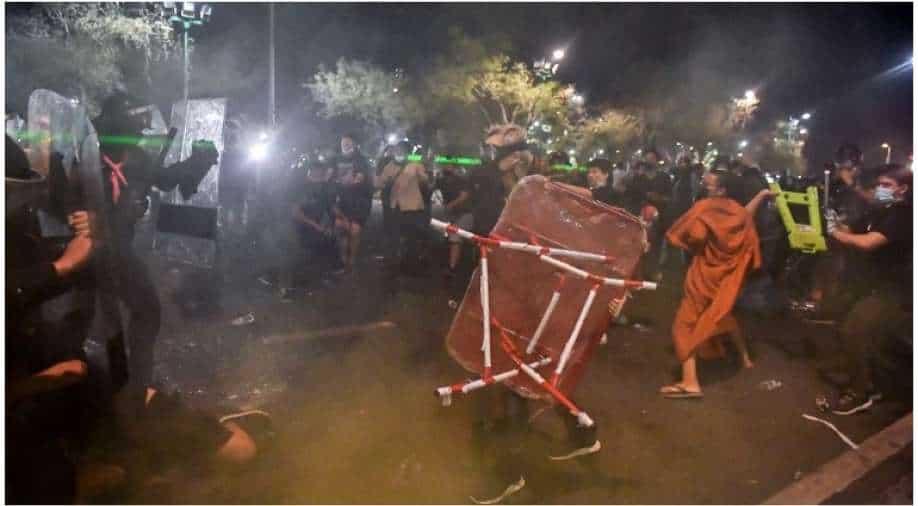 A pro-democracy protester (C) wields a table towards police during clashes at an anti-government demonstration at Sanam Luang near the Grand Palace in Bangkok Photograph:( AFP )

Pro-democracy protesters in Thailand clashed with police outside Bangkok's Grand Palace on Saturday. Thai police used water cannons and rubber bullets after demonstrators broke through a barricade of shipping containers to demand reforms to the kingdom's unassailable monarchy.

It was the latest night of unrest since Thailand's pro-democracy movement kicked off in July, calling for an overhaul of Premier Prayut Chan-O-Cha's administration and a rewrite of a military-scripted constitution.

But reforms to monarchy has been the most controversial demand. The protesters are also demanding the abolition of draconian royal defamation laws

A wall of cargo containers, two containers tall, had been erected in Sanam Luang, a historic field in front of the palace, to keep protesters away but, just an hour into the rally, they used ropes to yank some of the top-row boxes down, allowing a small opening.

"You're breaking the law!" said the police over an announcer as protesters used ropes to pull the lower containers out of place.

Once protesters were able to get through, they threw Molotov cocktails at dozens of police who stood by with water cannon trucks about 100 metres (300 feet) away, using the jets to prevent protesters from coming closer.

"Release our friends!" protesters shouted, referring to prominent leaders who have been detained since earlier this year.

Police chased demonstrators away from the area, firing rubber bullets continuously directly at them, according to AFP reporters on the ground.

Most protesters had dispersed by 8:30 pm (1330 GMT) but hard-core activists lingered on.