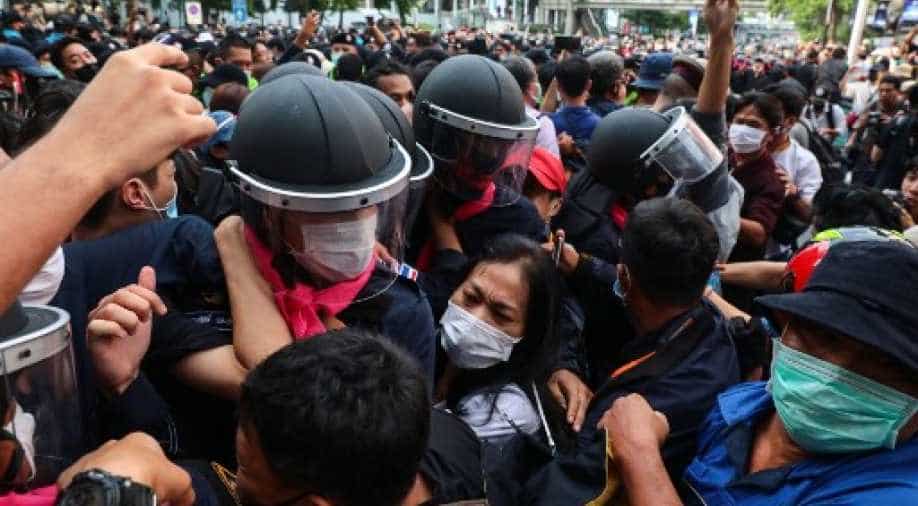 The Thailand Police on Tuesday issued summonses for 12 protest leaders to answer charges of lese majeste, defaming or insulting key members of the royal family.

This is the first time such charges have been brought under so-called lese majeste laws which cover insults to the royal family in more than two years. Anyone found guilty faces up to 15 years in prison.

Prime Minister Prayut Chan-O-Cha last week gave the green light for authorities to lay lese majeste charges, which bar any criticism of the royal family, against demonstrators who could now face up to 15 years in prison.

Tensions in the Thai capital are rising -- officers deployed water cannon and tear gas at a rally outside parliament last week, with 55 people injured and six-shot in scuffles with royalists. The source of the gunfire is under investigation.

Anti-royal graffiti was also daubed around police headquarters in central Bangkok, and demonstrators threw paint at the compound.

Thailand has one of the harshest royal defamation laws in the world. It is routinely interpreted to include any criticism of the monarchy -- including content posted or shared on social media.

Under section 112 of Thailand's penal code -- which authorities have not invoked since early 2018 -- anyone convicted of defaming, insulting or threatening the king, queen or heir faces between three and 15 years in prison on each count.