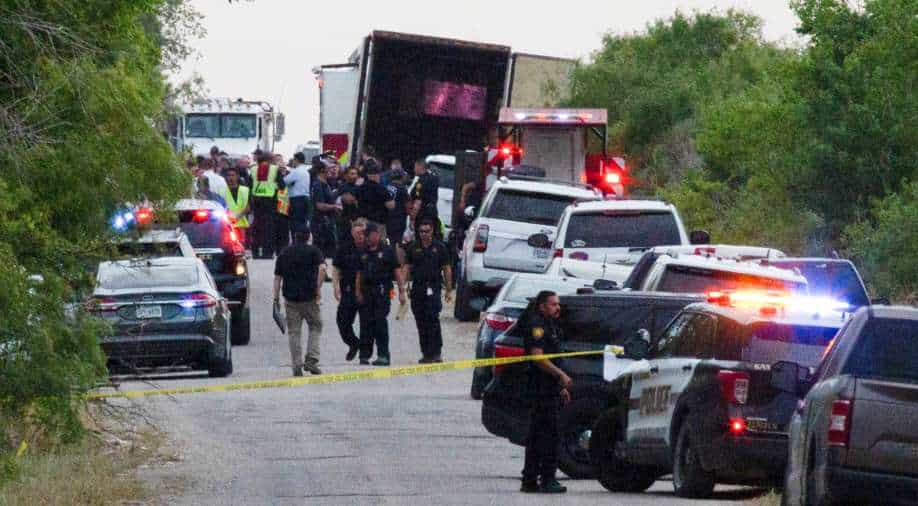 The bodies of 46 dead migrants were discovered inside a tractor-trailer on Monday in San Antonio, Texas, city officials said, in one of the most deadly recent incidents of human smuggling along the United States-Mexico border.

Mexico President Andres Manuel Lopez Obrador said at least 22 Mexicans were among the migrants found dead in a trailer truck in the US state of Texas on Tuesday, as he put the total number of fatalities at 50, as reported by AFP.

"It's a tremendous misfortune... so far there are 50 dead - 22 from Mexico, seven from Guatemala, two from Honduras and 19 still without information about their nationality," the Mexican leader said at a morning press conference.

The bodies of 46 dead migrants were discovered inside a tractor-trailer on Monday in San Antonio, Texas, city officials said, in one of the most deadly recent incidents of human smuggling along the United States.-Mexico border.

A San Antonio Fire Department official said they found "stacks of bodies" and no signs of water in the truck, which was found next to railroad tracks in a remote area on the city's southern outskirts.

Also Read: Need rescue on the sea? This Spanish city will charge you for it

Sixteen other people found inside the trailer were transported to hospitals for heat stroke and exhaustion, including four minors, but no children were among the dead, the department said.

"The patients that we saw were hot to the touch, they were suffering from heat stroke, exhaustion," San Antonio Fire Chief Charles Hood told a news conference. "It was a refrigerated tractor-trailer but there was no visible working air conditioning unit on that rig."

The deaths once again highlight the challenge of controlling migrant crossings at the U.S.-Mexico border, which have reached record highs.

The issue has proven difficult for United States President Joe Biden, a Democrat who came into office in January 2021 pledging to reverse some of the hardline immigration policies of his Republican predecessor

Donald Trump. Republicans have criticized Biden's border strategy ahead of the midterm congressional elections in November.

As reported by Reuters, Mexico's Foreign Minister Marcelo Ebrard called the suffocation of the migrants in the truck the "tragedy in Texas" on Twitter and said consular officials would go to the hospitals where victims had been taken to help "however possible."