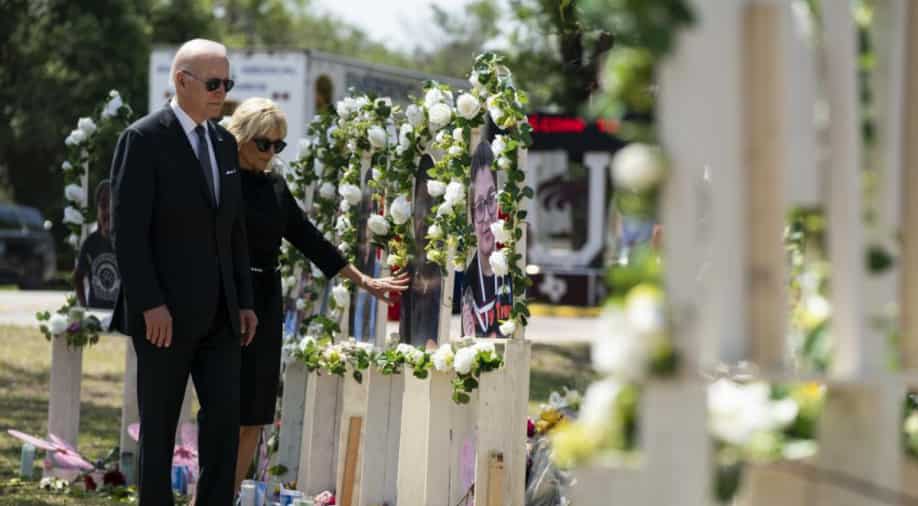 US President Joe Biden and first lady Jill Biden visit a memorial at Robb Elementary School to pay their respects to the victims of the mass shooting, in Uvalde, Texas Photograph:( AFP )

During Biden's visit to Uvalde, the crowd outside Sacred Heart Catholic Church chanted 'do something', to which he pledged: 'We will'

US President Joe Biden and first lady Jill Biden visited memorials at the Robb Elementary School and tried to comfort families in the south Texas town of Uvalde after the nation's deadliest school shooting in a decade.

They both visited a memorial of 21 white crosses, one for each of those killed, and paid respects to the makeshift shrines of the victims.

After this, they attended Mass at Sacred Heart Catholic Church, where Archbishop Gustavo Garcia-Siller tried to assuage the fears of the youngsters by saying “You have seen the news, you have witnessed the tears of your parents, friends.”

“You are the best reminders to us that the lives of the little ones are important,” he added.

During Biden's visit, the crowd outside the church chanted “do something”, to which he pledged: “We will.”

At the request of Uvalde Mayor Don McLaughlin, the US Department of Justice has announced it would review local law enforcement's slow response to the attack has sparked fury and mounted pressure over the decision by Uvalde's law enforcement agencies to allow the shooter to remain in a classroom for nearly an hour.

While officers waited in the hallway of Robb Elementary School, children inside the room made panicked and continuously made 911 calls for help.

After shooting his grandmother, 18-year-old Salvador Ramos entered the school on Tuesday with an AR-15 semi-automatic rifle and killed 21 people including 19 children and two teachers. However, his grandmother survived.

During his tenure, Biden has visited three mass shooting sites including earlier this month when he visited Buffalo, New York, after a gunman killed 10 Black people in a Saturday afternoon attack at a grocery store.