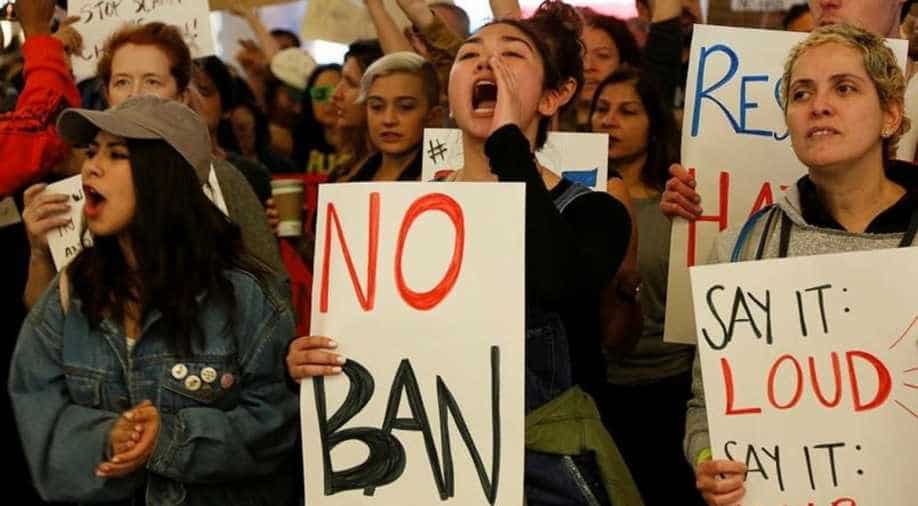 Chancellor Angela Merkel said the global fight against terrorism does not warrant putting groups of people under suspicion, adding US President Donald Trump's order to restrict people from seven Muslim-majority countries from entering the United States violates the spirit of international cooperation.

"The necessary and decisive battle against terrorism does not in any way justify putting groups of certain people under general suspicion - in this case people of Muslim belief or of a certain origin," Merkel told a news conference in Berlin.

"In my opinion, this act runs contrary to the basic principles of international refugee help and international cooperation," she said. "The chancellery and the foreign ministry will do everything they can, especially for those dual citizens affected, to clear up the legal ramifications and to emphatically represent their interests under the law."

She added: "We're clearly having close consultations with our European partners about this entire issue."

President Donald Trump in an executive order had banned nationals of seven Muslim-majority countries namely Iraq, Iran, Libya, Somalia, Sudan, Syria and Yemen from entering the United States for at least the next 90 days.

While signing the new immigration order at the Pentagon ceremony, Trump said that the government will impose tighter vetting to prevent foreign terrorists from entering the United States. Here's more to this story. (WION)

President Trump reacted strongly against the protests tweeting twice early on Monday morning justifying his stance on the matter.

If the ban were announced with a one week notice, the "bad" would rush into our country during that week. A lot of bad "dudes" out there!

There is nothing nice about searching for terrorists before they can enter our country. This was a big part of my campaign. Study the world!

There were protests in Europe and West Asia with even US citizens demonstrating against President Trump's executive order. Demonstrators shut down the traffic loop at Los Angeles International Airport and shouted slogans during a protest against the travel ban imposed by President Trump.

In Britain, people have signed a petition calling for President Trump's planned state visit to be cancelled to avoid embarrassing Queen Elizabeth, a grassroots backlash against his immigration policies.

The invitation to make a state visit, which will involve lavish displays of royal pageantry and a banquet hosted by the monarch, was conveyed by Prime Minister Theresa May when she visited Trump in Washington last week.

But May came under pressure to cancel the visit after Trump issued an executive order barring Syrian refugees from the United States and suspending travel from seven Muslim-majority countries, sparking protests at home and abroad.

The petition against the state visit, which is on the British parliament's website, passed the one million mark on Monday morning and by mid-afternoon local time had over 1.3 million signatories.

Guy Verhofstadt, one of the EU's top officials and its chief Brexit negotiator said President Donald Trump is part of a three-pronged attempt to undermine the European Union. The other two threats were from radicalised Islam and from Russian President Vladimir Putin, who Verhofstadt said was also working against the progress of the European Union project.

Verhofstadt served for nine years as prime minister of Belgium and has served in the European Parliament since 2009.