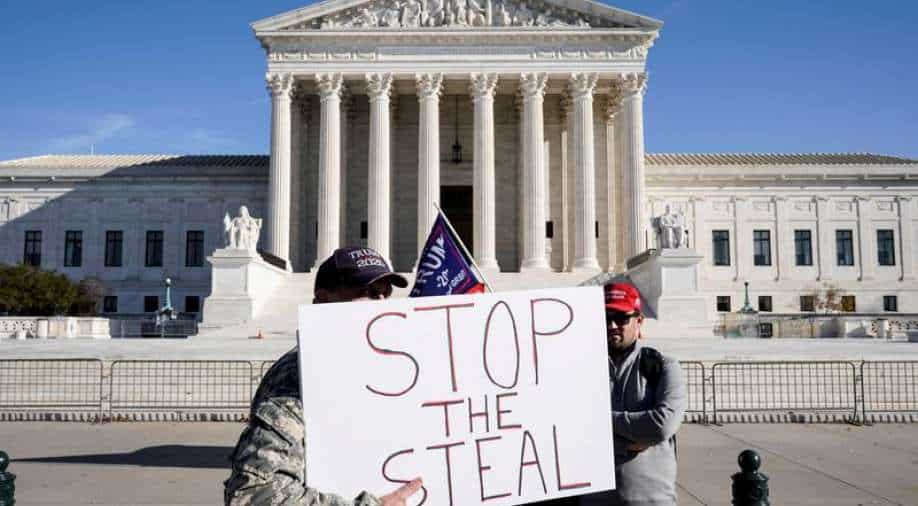 The campaigners have been alleging without evidence that President-elect Joe Biden stole the US election.

Conservative groups continued to protest across the United States on Saturday, as tensions rose in downtown Washington after dark as scores of pro-Trump "Proud Boys" protesters and "Antifa" counterprotesters faced off.

The campaigners have been alleging without evidence that President-elect Joe Biden stole the US election.

Trump's supporters carrying flags and signs made their way in small knots toward Congress and the Supreme Court through downtown Washington, which was closed to traffic by police vehicles and dump trucks.

Only few of the marchers wore masks, despite soaring COVID-19 deaths and cases, defying a mayoral directive for them to be worn outside. Several thousand people rallied in Washington, fewer than during a similar protest last month.

As some in the crowd echoed far right conspiracy theories about the election, a truck-pulled trailer flew Trump 2020 flags and a sign reading "Trump Unity" while blaring the country song "God Bless the USA."

Around 200 members of the Proud Boys, a violent far right group, had joined the marches earlier on Saturday near the Trump hotel. Many wore combat fatigues and ballistic vests, carried helmets and flashed hand signals used by white nationalists.

The two groups shouted insults at each other across a street near McPherson Square and some set off fireworks, but police kept them apart, according to a Reuters reporter on the scene.

Police pepper-sprayed at least two counter-protesters before the Proud Boys left the area and regrouped several blocks away.

More than 50 federal and state court rulings have upheld Biden's victory. The US Supreme Court on Friday rejected a long-shot lawsuit filed by Texas and backed by Trump seeking to throw out voting results in four states.

"My charge to you is to go back to where you are from" and make demands, Flynn told the crowd, without being more specific. The US Constitution is "not about collective liberty it is about individual liberties, and they designed it that way," he said.

Trump has refused to concede defeat, alleging without evidence that he was denied victory by massive fraud. On his way to Andrews Air Force Base and then the Army-Navy football game in New York, Trump made three passes in the Marine One helicopter over the cheering protesters.

Some protesters referenced the Biblical miracle of the battle of Jericho, in which the walls of the city crumbled after soldiers and priests blowing horns marched around it.