Ten dead in as rival Yemenis battle for control of Aden 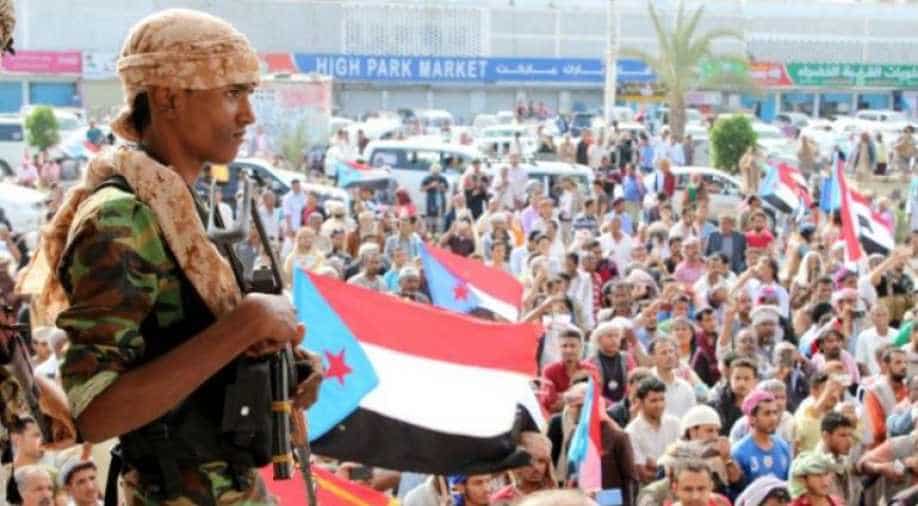 Supporters of the southern Yemeni separatists demonstrate against the government in Aden, Yemen January 28, 2018. Photograph:( Reuters )

At least 10 people were killed and about 100 others were wounded as southern Yemeni separatists fought government troops in the southern city of Aden on Sunday, local medics said, deepening a rift between forces that had been on the same side.

The worst clashes yet between southern separatists, who are allied to the United Arab Emirates (UAE), and forces loyal to the Saudi-based government risk crippling their once united war against the Iran-aligned Houthi movement in Yemen`s north.

The fighting subsided by the evening after Prime Minister Ahmed bin Daghr ordered a truce and instructed forces loyal to the government to return to barracks, witnesses said.

By evening, some shops were open but the streets were mostly deserted.

Yemen has been torn apart by three years of conflict between the Saudi-backed government of President Abd-Rabbu Mansour Hadi and the Houthi, and the factional fighting in the south compounds the misery.

The fighting broke out after the expiry of a deadline set last week by separatists from the Southern Transitional Council (STC) for Hadi to dismiss the bin Daghr government, accusing it of corruption and mismanagement. The government denies this.

Gunmen were deployed throughout most of Aden's districts and there was heavy automatic gunfire and explosions in the southern port city, according to Reuters witnesses.

Armed separatists appeared to gain the upper hand by wresting a key military base in Khor Maksar district in northern Aden and several government buildings from soldiers loyal to Hadi, local newspaper Aden al-Ghad reported on its website.

Residents said that hundreds of pro-Southern demonstrators had gathered in the main square.

Hospitals said at least nine fighters and one woman were killed in the fighting. International medical charity Medecins Sans Frontieres said 86 wounded people were being treated, including seven people from one family whose car was hit by a shell.

Bin Daghr had earlier denounced the separatists' actions as a coup and said the outcome of the contest in Aden was in the hands of their backers, the UAE, who enjoy overall control in the city. He said the situation was headed toward "a comprehensive military confrontation ... (which is) a direct gift to the Houthis and Iran".

"This is a serious matter and the coalition and Arabs as a whole must move to save the situation," bin Daghr wrote in a message on his Facebook page. "The matter is in their hands and the hope, as we in the government see it, is on the (United Arab) Emirates."

UAE Minister of State for Foreign Affairs Anwar Gargash said the UAE's stand was "clear and principled in supporting the Arab coalition led by Saudi Arabia".

The STC accused bin Daghr's government of attacking peaceful protesters and urged Hadi to sack the prime minister and his cabinet.

"The STC holds the bin Daghr government fully responsible after it violated the Arab coalition's call for calm and used weapons to prevent demonstrators from reaching the parades square," it said in a statement.

Although Hadi remains in exile in Saudi Arabia, his administration and local allies nominally control about four-fifths of Yemen`s territory, but political and military leaders in Aden now want to revive the formerly independent state of South Yemen.

A top military adviser to Hadi, Mohammed Ali al-Miqdashi, said any move toward rebellion would render the southerners an enemy.

"There is no difference between the Houthis and anyone else who rebels against the legitimate government, no matter who they are - left, right, south, east," said Miqdashi, speaking at a remote military base near the central Yemeni city of Marib, late on Saturday.