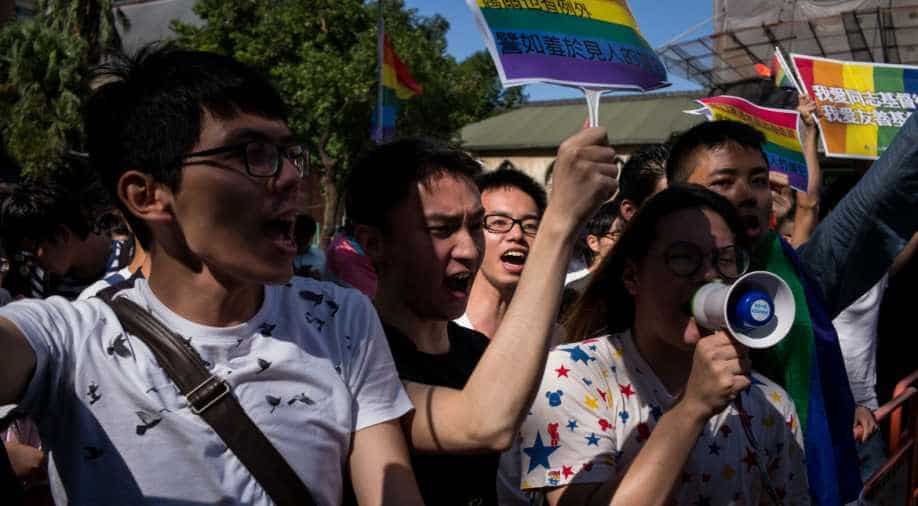 "Stop reviewing (the bill). Put it to a referendum," protesters shouted. Some demonstrators climbed over a wall into the parliamentary grounds and were later removed by police. Photograph:( Getty )

Taiwan's parliament on Monday passed the first draft of a controversial marriage equality bill, moving the island a step closer to becoming the first place in Asia to legalise same-sex nuptials.

A legislative committee approved the amendment to the civil law that would allow gay couples to legally tie the knot, as dozens of opponents to the change rallied outside to demand a referendum on the divisive issue.

"Stop reviewing (the bill). Put it to a referendum," protesters shouted. Some demonstrators climbed over a wall into the parliamentary grounds and were later removed by police. One man even made it as far as the committee's meeting room but was stopped before he could reach the podium.

Lawmaker Yu Mei-nu of the ruling Democratic Progressive Party (DPP), who proposed the bill, hailed Monday's decision as an example of Taiwan's "mature democracy" and called for calm and tolerance.

"It is not the end of the world to pass such a bill. Heterosexual marriages will not be destroyed...I hope everybody will take a calm and tolerant attitude," Yu told reporters. The amendments require further vetting before they can take effect, a process Yu estimated would take around six months.

While Taiwan is considered progressive on many issues including gay rights, its roots in Confucianism translate into a strong sense of adherence to traditional values such as family loyalty and social hierarchy. Past attempts to legalise same-sex marriage stalled under the Kuomintang party, which dominated politics for decades until it was unseated by the DPP in this year's elections.

While support for marriage equality has gained momentum under President Tsai Ing-wen, who has openly supported legalising same-sex marriage, so too have opposing voices.

Both sides held rallies in the month leading up to Monday's decision, attracting tens of thousands of protesters.