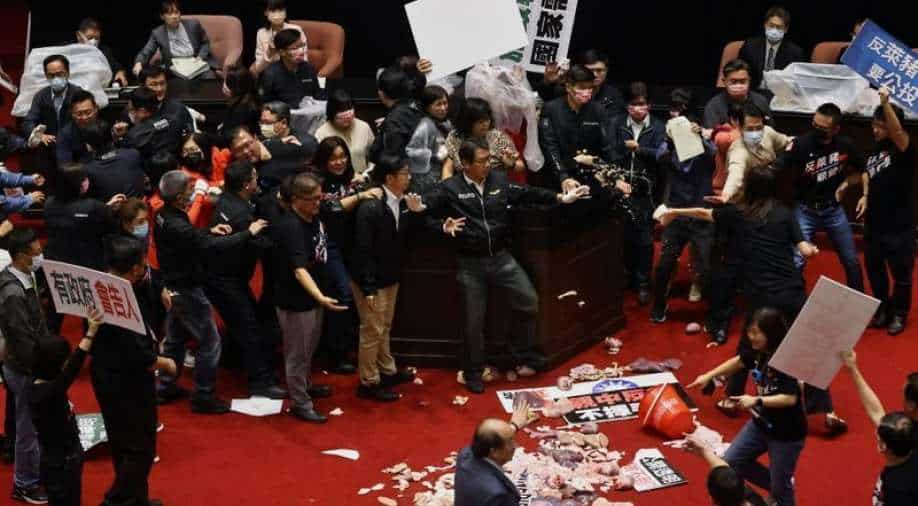 Legislators from main opposition Kuomintang (KMT) party threw pig guts and exchanged punches with other lawmakers as they tried to stop the premier taking questions, in a bitter dispute over easing US pork imports.

Taiwan is a rambunctious democracy and fighting is not uncommon in parliament. But the scene at a parliament debate in Taiwan on Friday turned particularly ugly.

Legislators from main opposition Kuomintang (KMT) party threw pig guts and exchanged punches with other lawmakers as they tried to stop the premier taking questions, in a bitter dispute over easing US pork imports.

President Tsai Ing-wen announced in August that the government would, from January 1, allow imports of US pork containing ractopamine, an additive that enhances leanness but is banned in the European Union and China, as well as US beef more than 30 months old.

While welcomed in Washington, and removing a roadblock to a long sought after US free trade deal for Taiwan, the KMT has strongly opposed the decision, tapping into public concern about food safety after several high-profile scandals in recent years.

Since the latest session of parliament began in mid-September, the KMT has protested against the pork decision by blocking Premier Su Tseng-chang from delivering regular reports and taking questions by occupying the podium where he speaks.

According to Reuters, the ruling Democratic Progressive Party (DPP) decided they were going to ensure Su could speak on Friday, and formed a protective barrier around him as he made his way in, as KMT lawmakers blew whistles, held banners and sounded air horns.

As Su began speaking, KMT lawmakers threw buckets of pig guts his way, and some exchanged blows, with a short but vicious encounter between a group of KMT legislators and Chen Po-wei from the small Taiwan Statebuilding Party. 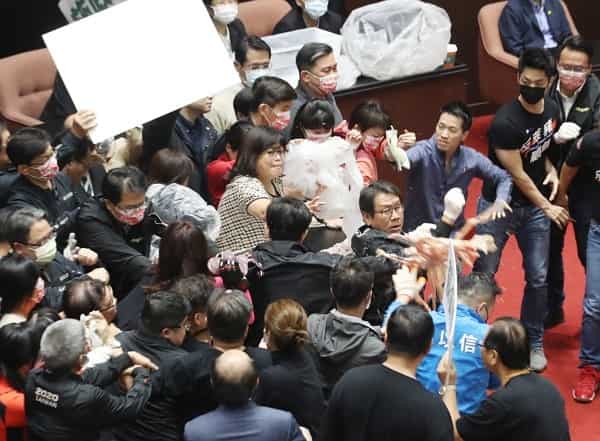 Su soon withdrew, but later got back up to try and take questions, his words drowned out by KMT lawmakers.

The DPP condemned the protests, saying in a statement the throwing of the pig guts was a waste of food that "stank up" the parliament floor and was "disgusting", calling for a return to rational debate.

The KMT says the pork decision has been rushed through and is a health threat, charges the DPP denies.