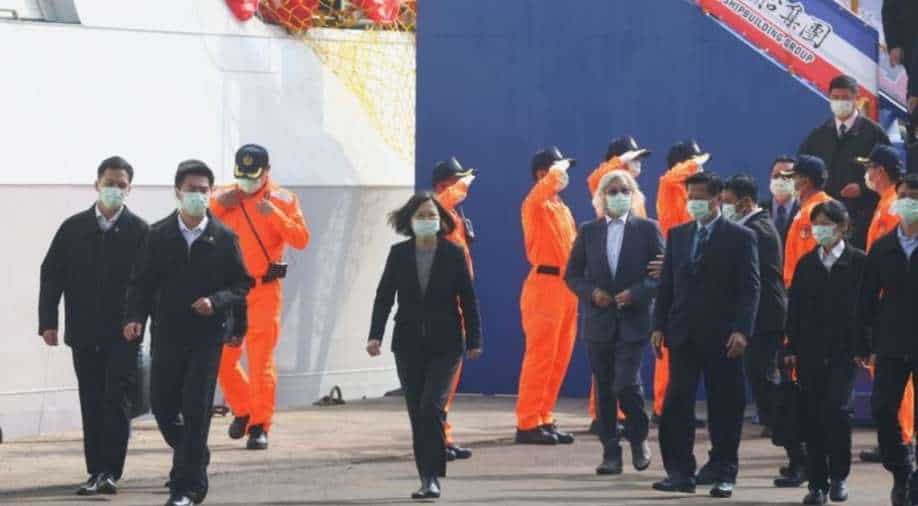 With Taiwan’s armed forces dwarfed by China’s, Tsai has championed the concept of 'asymmetric warfare', including adding weapons that are mobile and harder to attack, to make any Chinese offensive costly and difficult

Taiwan's President Tsai-ing Wen launched the first of a new fleet of coastguard ships on Friday, an advanced catamaran that can be armed with missiles during war, as the island bolsters its defences as tensions rise with China.

''The ships are superior in speed and function compared to previous ships of the same tonnage, demonstrating the technical strength of Taiwan's shipbuilding industry,'' President Tsai Ing-wen said at the launch ceremony in the southern city of Kaohsiung.

Tsai has made boosting Taiwan's indigenous defense capacity a central pillar of her defense policy. She relaunched the military aviation industry with the production of new trainer jets and has pushed for the development of more sophisticated systems by utilising the island's high-tech industries.

President Tsai Ing-wen has made military modernisation a priority for the Chinese-claimed island. Beijing has never renounced the use of force to bring Taiwan under its control.

The new Anping (CG-601) vessel is the first of 12 locally designed and built 600-ton class catamaran patrol vessels that can also be used in a military capacity.

The Anping is a similar vessel to the Tuo Chiang-class of corvettes, on which it is based, and has space for launchers for Hsiung Feng anti-ship and sea-to-land missiles but has added equipment for rescue operations.

The first is already in service and has been referred to by Taiwan’s navy as the “aircraft carrier killer” due to its missile complement. China has two carriers in operation and is building at least one more.

With Taiwan’s armed forces dwarfed by China’s, Tsai has championed the concept of “asymmetric warfare”, including adding weapons that are mobile and harder to attack, to make any Chinese offensive costly and difficult.

Taiwan’s coastguard is often involved in confrontations with Chinese fishing and sand-dredging ships which Taiwan says operate illegally in its waters.