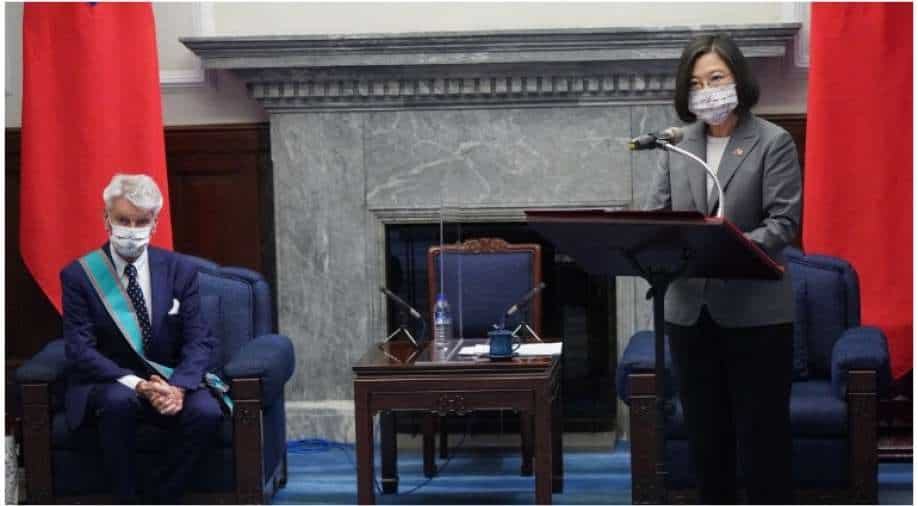 Taiwan President Tsai Ing-Wen's comments have come at a point when tension between China and Taiwan are very high. Over the last week, Taiwan has said that China flew about 150 of its fighter jets into Taiwan's air defence zone

Taiwanese President Tsai Ing-Wen said on Friday that Taiwan did not seek military confrontation but would do whatever it takes to preserve its freedom. Her words have come amid rising tensions with China. Taiwan is claimed by China as its own territory.

Taiwan has reported that close to 150 Chinese air force aircrafts made sorties into its air defence zone over the period of four days. These missions have now ended.

Taiwan has complained for more than a year of such activities, which it views as "grey zone warfare", designed to wear out Taiwan's armed forces and test their ability to respond.

"Taiwan does not seek military confrontation," Tsai told a security forum in Taipei.

"It hopes for a peaceful, stable, predictable and mutually-beneficial coexistence with its neighbours. But Taiwan will also do whatever it takes to defend its freedom and democratic way of life."

China claims that it is acting to protect its security and sovereignty. It blames the United States, Taiwan's main international backer and arms supplier, for the current tensions.

Tsai said that prosperity in the Indo-Pacific needs a peaceful, stable and transparent environment and there are many opportunities in the region.

"But this also brings new tensions and systemic contradictions that could have a devastating effect on international security and the global economy if they are not handled carefully."

Taiwan will work together with other regional countries to ensure stability, she added.

"Taiwan is fully committed to collaborating with regional players to prevent armed conflict in the East China, South China Seas and in the Taiwan Strait."

Taiwan has been seeking the support of other democracies as the stand-off with China worsens, and is this week playing host to four French senators and former Australian prime minister Tony Abbott, though he is visiting in a personal capacity.

Abbott, speaking at the same forum, condemned China for its aggressive actions, aimed not only as his country but also Taiwan.

"Its relative power might have peaked with its population aging, its economy slowing and its finances creaking. It is quite possible that Beijing could lash out disastrously quite soon," he said.

Abbott added that he did not believe the United States could sit by and watch China "swallow up" Taiwan.

"I don't believe Australia should be indifferent to the fate of a fellow democracy of almost 25 million people."