Syrian war has killed nearly half a million people since 2011, new tally finds 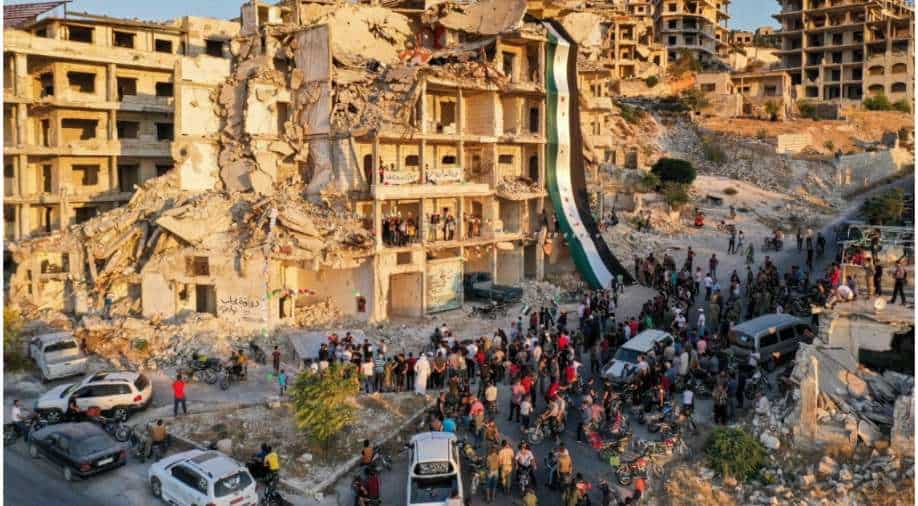 The decade-long civil war destroyed the country. This increased the anti-Assad sentiment. People can be seen gathering for a demonstration in support of Syria's President Bashar al-Assad and against US sanctions on the country, at the Umayyad Square in the centre of the capital Damascus on June 11, 2020.| Photograph:(AFP)
Follow Us

Currently, violence levels in the country are at their lowest since the beginning of the conflict as government forces have reconquered large parts of the country.

The Syrian war has killed almost half a million people, a new tally on Tuesday claimed. According to Syrian Observatory, which functions out of the UK, the decade-long war has killed 494,438 since it began in 2011.

The monitor added over 100,000 deaths to the toll which were recently confirmed. The previous toll was confirmed by the Observatory in March 2021, which put the number of deaths at 388,000. The monitor added 105,015 deaths after using its network of ground sources, AFP reported.

"The overwhelming majority of these deaths occurred between the end of 2012 and November 2015," Observatory head Rami Abdel Rahman told AFP on the updated toll.

Out of the recent fatalities, over 42,000 are civilian deaths. The monitor added that most of them were killed in Syrian prisons under torture.

A lull in fighting has allowed organisations to update their tallies. "It provided us with a window to document tens of thousands of cases for which we lacked evidence," Rahman further said.

Currently, violence levels in the country are at their lowest since the beginning of the conflict as government forces have reconquered large parts of the country. With new figures, the total civilian deaths stand at 159,774. Syrian government forces and allied militias account for majority of deaths.

In addition, the monitor noted 57,567 deaths in government prisons and detention centres since 2011. This is way higher than the previous estimate of 16,000 which was reported in March.

168,326 deaths were reported among Syrian soldiers. 68,393 jihadists, mostly members of the Islamic State have also been killed in the conflict, along with 79,844 other rebels.