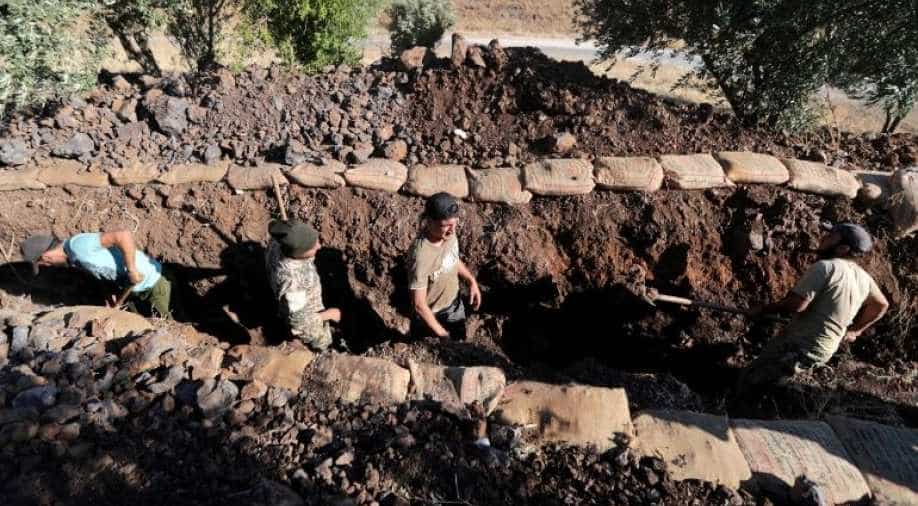 Volunteers use shovels to dig a trench in the town of Salqin, Syria. Photograph:( Reuters )

The Hezbollah media unit described the town as the gateway to the southern countryside of Idlib, to the main Damascus-Aleppo highway and to the city of Khan Sheikhoun.

Syria's army has captured a strategically important town in Idlib in the rebels' last major enclave, a war monitor and a military media unit run by its ally Hezbollah reported on Sunday.

The capture of al-Hobeit represents the most significant advance the army has made in Idlib province since the start of its offensive three months ago, the Britain-based Syrian observatory for Human Rights said.

The Hezbollah media unit described the town as the gateway to the southern countryside of Idlib, to the main Damascus-Aleppo highway and to the city of Khan Sheikhoun.

Rebels have not yet commented on the fighting around al-Hobeit but this week acknowledged losing ground nearby as the army ramped up its offensive after a brief ceasefire.

Fighting on Saturday killed more than 100 fighters from both sides as the army and its allies unleashed about 2,000 air and artillery strikes against rebels dug into Syria's northwest, the Observatory said.

The three-month offensive has made slower progress than any by Syrian President Bashar al-Assad since Russia entered the war on his side in 2015, prompting a run of military victories that have brought most of Syria back under his rule.

Rebels fighting to oust him are now concentrated in the northwestern enclave, covering most of Idlib province and parts of Aleppo, Hama and Latakia provinces, though they also have a small presence in the southeast near the border with Jordan.

Assad, who offered prayers for Islam's Eid al-Adha holiday in Damascus on Sunday morning, has sworn to take back every inch of Syria. However, other large areas are still beyond his control, including the Kurdish-controlled northeast and a Turkish-held strip along the frontier.

The northwest offensive has prompted warnings by the United Nations and aid agencies of a new humanitarian crisis, with hundreds of thousands of people having fled the violence to seek shelter at the border with Turkey.