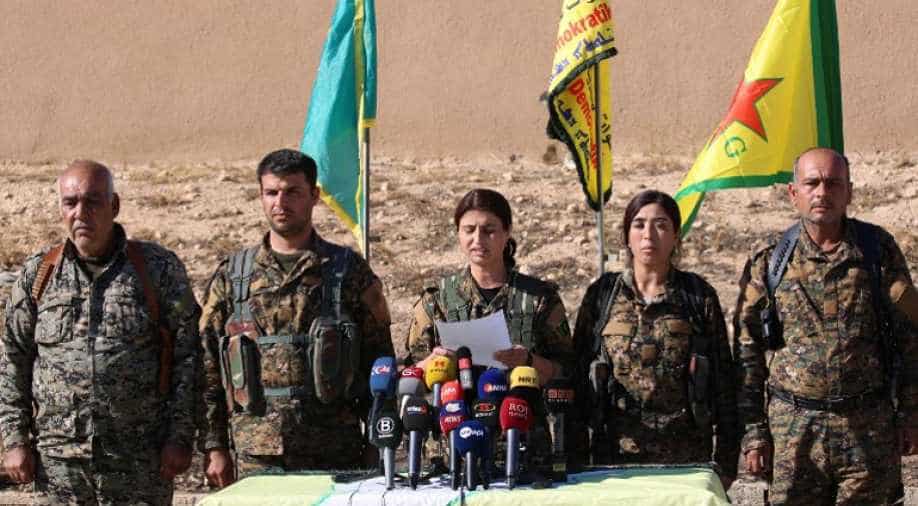 A majority of the fighters will be provided by YPG, a Kurdish-dominated force. Washington's decision to support the Kurds comes despite a possible fallout?with Turkey, which has been a crucial ally of the US in their fight against Islamic State. Photograph:( AFP )

"The major battle to liberate Raqa and its surroundings has begun," Jihan Sheikh Ahmed, a spokeswoman for the Syrian Democratic Forces (SDF), said at a press conference in Ain Issa, some 50 kilometres (30 miles) north of the jihadist bastion.

The operation, dubbed "The Wrath of the Euphrates," involves some 30,000 fighters and had begun on Saturday night, Ahmed said.

SDF spokesman Talal Sello told AFP it would proceed in two phases, first seizing areas around Raqa and isolating the city, then "taking control of the city" itself.

"The fight will not be easy, and will require accurate and careful operations because IS will defend its bastion knowing that the loss of Raqa will mean it is finished in Syria," he said.

An AFP correspondent in Ain Issa saw dozens of armed SDF fighters heading on vehicles towards the frontline.

The long-awaited operation comes two years after IS seized control of large parts of Syria and Iraq and declared its cross-border "caliphate".

The jihadists have suffered a string of territorial defeats in recent months and are under pressure on multiple fronts.

After launching an offensive on Mosul on October 17, Iraqi special forces pushed into the city on Friday and have been facing stiff resistance from the jihadists.

The loss of Mosul and Raqa would deprive IS of its largest population centres, undermining the group's claim to a self-declared "state".

But capturing the two cities, both still home to large civilian populations, is expected to be a lengthy, and likely bloody, process.

Driving the jihadists from their urban strongholds has been the end-game since a US-led coalition launched air strikes against IS in the summer of 2014.

The coalition has also provided training and deployed hundreds of advisors to work with Iraqi forces and select Syrian fighters, including the SDF.

Sello said the alliance had received new weapons from the coalition for the Raqa battle, including anti-tank missiles.

Shortly after visiting Iraq last month to check on the Mosul offensive, US Defence Secretary Ashton Carter said that an assault on Raqa would take place "within weeks".

The idea of simultaneous operations against Mosul and Raqa "has been part of our planning for quite a while," he said.

But in Raqa the battlefront is far more complicated.

After five years of civil war, Syria is divided into a patchwork of fiefdoms, with President Bashar al-Assad's regime, IS and a range of opposition forces all holding territory.

Carter singled out the SDF as the coalition's potential ground partner in the Raqa offensive and last week the alliance said it would be leading the assault.

Dominated by the powerful Kurdish People's Protection Units (YPG), the SDF has in recent months flushed IS out of swathes of territory in northern Syria, including the flashpoint town of Manbij in August.

Washington has promoted the SDF as a key ally in the fight against IS, but the alliance is complicated by Turkey's fierce opposition to the YPG.

Ankara considers the militia a "terrorist" group, and in August launched its own operation inside northern Syria, targeting both IS and the YPG.

Sello said on Sunday that the SDF had "agreed definitively" with the United States "that there will be no role for Turkey or the armed factions allied with it in the operation" to capture Raqa.

In northern Syria on the Euphrates River, Raqa was home to some 240,000 residents before 2011 and more than 80,000 people have fled there from other parts of the war-torn country.

It was the first provincial capital to fall from government control when rebels captured it in March 2013, two years after an uprising against Assad began.

IS drove out the rebels in January 2014 and five months later declared its self-styled Islamic "caliphate" in Syria and Iraq.

Raqa became the scene of some of IS's worst atrocities, from stonings and beheadings to the trading of sex slaves.

Thousands of foreign fighters flocked to Raqa to join IS and US officials have described it as the nerve centre for the group's attacks abroad.