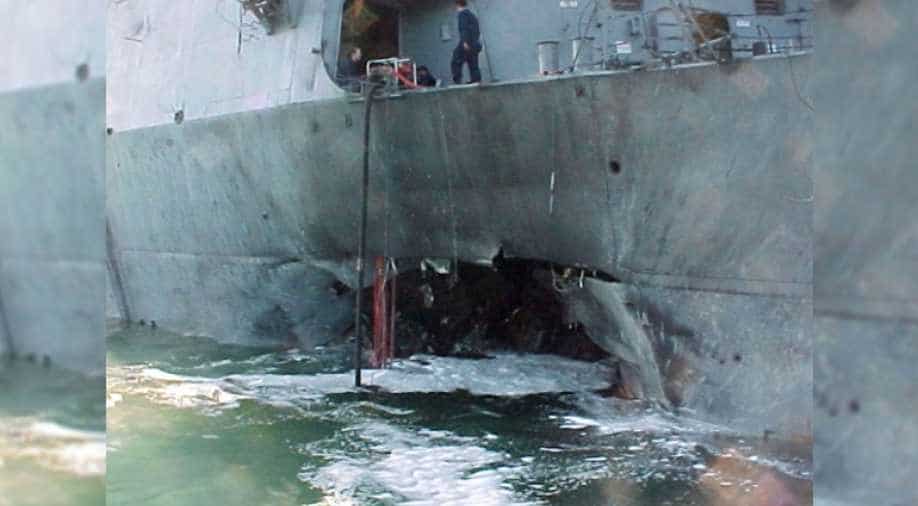 The port side damage to the guided missile destroyer USS Cole is pictured after a bomb attack during a refueling operation in the port of Aden in this October 12, 2000 file photo. Photograph:( Reuters )

The 17 sailors were killed, and dozens of others injured, in the attack on October 12, 2000, when two men in a small boat detonated explosives alongside the Navy guided missile destroyer as it was refueling in the southern Yemeni port of Aden.

Sudan has agreed to compensate the families of sailors killed in an al Qaeda attack on the USS Cole warship 20 years ago, state news agency SUNA said on Thursday, part of government efforts to remove the country from a list of state sponsors of terrorism.

The report said the settlement had been signed on February 7. It did not mention the amount paid in compensation, but a source with knowledge of the deal, speaking on condition of anonymity, said that Sudan had agreed to settle the case for $30 million.

The 17 sailors were killed, and dozens of others injured, in the attack on October 12, 2000, when two men in a small boat detonated explosives alongside the Navy guided missile destroyer as it was refueling in the southern Yemeni port of Aden.

Khartoum agreed to settle "only for the purpose of fulfilling the condition set by the US administration to remove Sudan from its list of state sponsors of terrorism", SUNA said, citing the justice ministry.

Being designated as a state sponsor of terrorism makes Sudan ineligible for desperately needed debt relief and financing from lenders such as the International Monetary Fund and World Bank.

Also read: Al-Qaeda is stronger today than it was on 9/11

Removal from the list potentially opens the door for foreign investment.

"The government of Sudan would like to point out that the settlement agreement explicitly affirmed that the government was not responsible for this incident or any terrorist act," the justice ministry said in its statement, cited by SUNA said.

The announcement comes two days after Khartoum and rebel groups agreed that all those wanted by the International Criminal Court for alleged war crimes and genocide in the Darfur region should appear before the tribunal. The list includes Sudan's ousted president Omar al-Bashir.

The US sailors' relatives had sued Sudan under the 1976 Foreign Sovereign Immunities Act, which generally bars suits against foreign countries except those designated by the United States as a sponsor of terrorism, as Sudan has been since 1993.

Sudan did not defend against the claims in court. In 2014, a trial judge found that Sudan's aid to al Qaeda "led to the murders" of the 17 Americans and awarded the families about $35 million, including $14 million in punitive damages.

Sudan then tried to void the judgment, arguing the lawsuit was not properly served on its foreign minister, violating notification requirements under US and international law.

The US Supreme Court turned down the bid by the families last year.