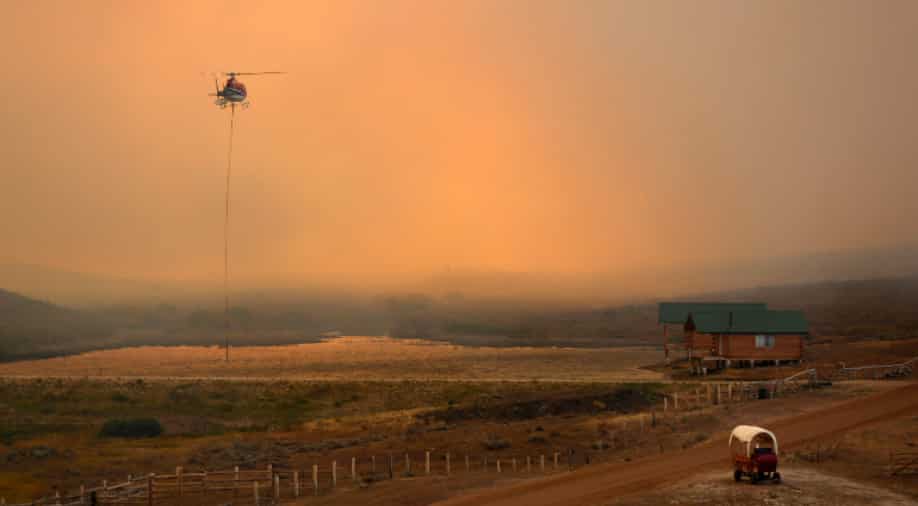 A firefighting helicopter fills a bucket of water in heavy smoke as the North Merna wildfire burns in the Bridger National Forest west of the town of Pinedale in Sublette County, Wyoming Photograph:( Reuters )

In comparison to Europe, South Asia is ten times more exposed to water stress, physical events, and heatwaves that are triggered by climate change

A new study conducted on 135 countries has estimated that climate change is putting 4 per cent of the global Gross Domestic Product (GDP) at risk.

In comparison to Europe, South Asia is ten times more exposed to water stress, physical events, and heatwaves that are triggered by climate change.

The study, conducted by rating firm S&P Global, assigns credit scores to the countries on the basis of the health of their economies.

Trucost, a company that estimates the hidden costs of unsustainable use of natural resources, helped S&P Global in conducting the study.

They used data from the World Bank of lower and lower-middle-income countries and found they that are likely to see 3.6 times greater gross domestic product losses on average than richer ones.

A credit analyst at the company, Roberto Sifon-Arevalo told Reuters news agency, "To different degrees, this is an issue for the world."

Highlighting the standing point of the study, he says "One thing that really jumps out is the need for international support for many of these (poorer) parts of the world".

'RCP 4.5', which are major new climate change policies that governments largely shy away from, were considered as the baseline scenario by scientists.

They found out East Asia and Pacific countries face similar levels of exposure to natural calamities as Central Asia, the Middle East, and North Africa, and Sub-Saharan Africa regions.

According to Sifon-Arevalo, ''We strive to tell what is relevant and where but we don't rate to a worst-case scenario, we rate to a base-case scenario.''

On average a weather, climate, or water-related disaster has occurred somewhere in the world every day for the last 50 years as per the World Meteorological Organization (WMO).

They have caused daily losses worth over $202 million other than 115 casualties on a regular basis.

More than 60 countries could see their ratings cut because of global warming by 2030 according to another study conducted by the researchers from Cambridge University, the University of East Anglia and London.