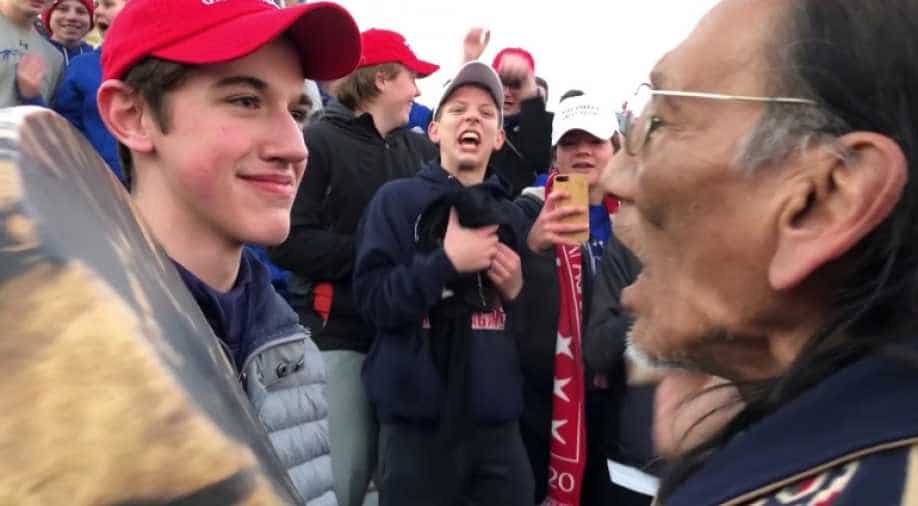 The footage had sparked outrage on social media and led the student's high school to issue a statement condemning his actions and promising an investigation.

A white high school student seen with classmates appearing to confront a Native American Vietnam veteran near the Lincoln Memorial issued a statement on Sunday that video of the incident that went viral gives a false impression that the teens were instigators.

Nick Sandmann, a student from the private, all-male Covington Catholic High School in northern Kentucky, is seen in the video standing face to face with the Indian activist, Nathan Phillips, staring at him with a smile, while Phillips sings and plays the drum.

The footage, shared online by organizers of an indigenous people's march that took place in Washington on Friday before the incident, shows a group of fellow Covington students surrounding Phillips apparently mocking him.

Phillips recounted in a separate video that he heard the students chanting "build that wall," during the encounter.

The students, many wearing baseball caps emblazoned with President Donald Trump's "Make America Great Again" slogan, were in the nation's capital the same day for an anti-abortion rally.

The footage sparked outrage on social media and led the high school to issue a statement condemning the students' actions and promising an investigation.

But Sandmann, whose statement was tweeted by CNN anchor Jake Tapper late on Sunday, insisted the video was misinterpreted, leading to "outright lies being spread about my family and me."

He denied acting with any disrespect toward Phillips.

According to Sandmann, his group was waiting on the steps of the Lincoln Memorial for their bus back to Kentucky when four African American protesters nearby began shouting racially charged insults at them.

With permission from their teacher chaperones, the students responded by shouting "school spirit" chants to "drown out the hateful comments" directed at them.

In the midst of this interaction, Sandmann said, he noticed that a Native American protester - since identified as Phillips - "began playing his drum as he waded into the crowd, which parted for him."

"He locked eyes with me and approached me, coming within inches of my face. He played his drum the entire time he was in my face," Sandmann recalled.

"I never interacted with this protester. I did not speak to him. I did not make any hand gestures or other aggressive moves," Sandmann wrote, adding that he was "startled and confused" as to why Phillips approached him.

Sandmann said he reasoned that by remaining "motionless and calm" he hoped to defuse the situation.

His account was reinforced, at least in part, by a New York Times report on Sunday quoting Phillips, 64, as acknowledging he had approached the crowd of students in a bid to ease racial tensions that had flared between the mostly white teens and the African American protesters.

"I stepped in between to pray," said Phillips, an elder of Nebraska's Omaha tribe and a well-known activist who was among those leading the Standing Rock protests in 2016-2017 against the construction of an oil pipeline in North Dakota.

Phillips could not be reached by Reuters for comment over the weekend.