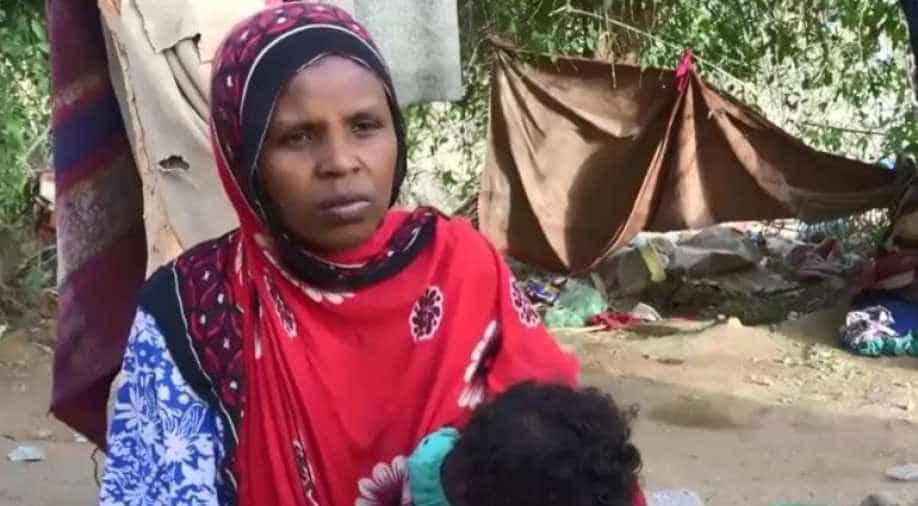 Shafiqa Aly is forced to leave her children alone in the camp where they've settled in Abs, Hajjah, to go beg for food, albeit sometimes unsuccessfully and her family is forced to go to sleep hungry.

Stranded under a tree where she fights off snakes and hunger with her 10 children, a Yemeni mother plea for help from humanitarian organisations.

Shafiqa Aly became solely responsible for feeding her children after her husband fell victim to mental illness. He could spend up to four months roaming the streets without seeing his family, she said.

Aly is forced to leave her children alone in the camp where they've settled in Abs, Hajjah, to go beg for food, albeit sometimes unsuccessfully and her family is forced to go to sleep hungry.

Aly is one of hundreds of thousands of displaced people in Hajjah, where humanitarian aid agencies cannot reach all those who need help, especially people like Aly who do not have a national ID card.

Across Yemen's remote mountain villages, the country's war-induced economic crisis has left parents destitute, hungry and watching their children waste away from malnutrition and unclean water.

As summer sets in and temperatures soar well above 40 degrees Celsius, threats of scorpions and snakes increase in remote areas such as displaced camps.

Since the start of the Muslim fasting month of Ramadan, many displaced Yemenis have been forced to break their fast in the dark, eating to the sounds of missiles and warplanes.

Heavy fighting has broken out in the last couple of months in the north-western regions Hajjah and Abbs.

Tens of thousands of people have been killed in the conflict that pits the Houthis against the Saudi-backed government of Abd-Rabbu Mansour Hadi. The Sunni Muslim alliance intervened in the war in March 2015 in support of Hadi after his government was driven out of Sanaa by Houthi forces in late 2014.

The conflict is widely seen in the region as a proxy war between Saudi Arabia and Iran. The Houthis deny they are puppets of Tehran and say their revolution is against corruption.

Four years of conflict have pushed Yemen, which was already one of the poorest Arab states, to the brink of famine.