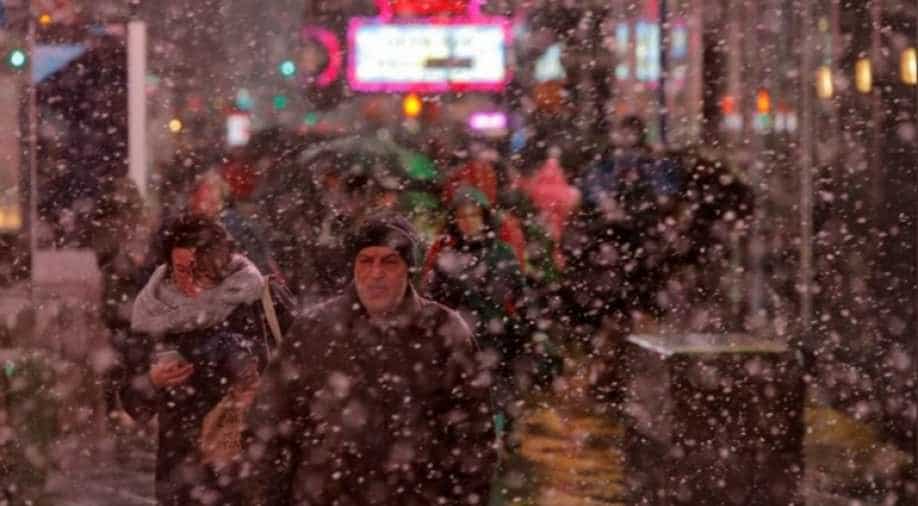 A man walks through Times Square during a winter nor'easter in New York City. Photograph:( Reuters )

Almost 1.7 million homes and businesses were without power in the Northeast and Midwest as the storm pummelled the East Coast from Virginia to Maine. Government offices in Washington closed as winds gusted to more than 60 mph (96 kph) in the U.S. capital.

A flood surge at extreme high tide sent seawater into Boston's coastal streets, the second time this year that the area had flooded. Wind gusts approaching 70 mph (113 kph) helped force in the water while downing trees and power lines.

The high water receded in the afternoon, but the National Weather Service said Boston could face renewed flooding with a near-record high tide forecast around midnight on Friday.

"That one still looks like it's going to be on target for at least moderate coastal flooding, which means we're going to see some problems in Boston," said Jim Hayes, a meteorologist with the agency's Weather Prediction Center in College Park, Maryland.

The storm packed a deadly punch, with a falling tree killing a man in his 70s in Newport, Rhode Island, a police spokesman said.

In Putnam Valley, New York, an 11-year-old boy was killed when a tree crashed into his home, WPIX television reported, citing Putnam County sheriff's deputies. A spokesman for the sheriff's department could not be reached for comment.

A 44-year-old male passenger in a truck was killed in James City County, Virginia, when an oak tree toppled onto the vehicle, police said in a statement.

In Chesterfield County, Virginia, a tree fell onto a home and struck a sleeping 6-year-old boy, the county said in a statement. The child died of his injuries at a hospital.

Outside Baltimore, a 77-year-old woman was struck by a falling tree branch at her home near Kingsville, Maryland, a Baltimore County Fire Department spokesman said.

"People need to take this very seriously," Massachusetts Governor Charlie Baker told a Thursday press conference, telling people to prepare for a repeat of the flooding that affected much of state's east coast during the January 4 "bombogenesis" winter storm."If you live in an area that is told to evacuate, we strongly encourage you do so first thing Friday morning."

The National Weather Service had coastal flood watches and warnings in place from southern Maine through coastal North Carolina, including New York's eastern suburbs, and also warned that a snowstorm heading east from the Ohio Valley could drop significant amounts of snow in northern New York State. It forecast storm surges of up to four feet (1.2 m) for eastern Massachusetts.

Federal offices closed on Friday in Washington D.C. while dozens of schools throughout the region canceled classes.

Ocean-facing homes could be destroyed by the storm surge and waves, while people who live in neighborhoods reached by low-lying roads could be cut off from services for hours or days, officials and government forecasters warned.

"This could be another storm with prolonged onshore flooding," said Paul Walker, a meteorologist with Accuweather, a private forecasting service. Flooding could begin to pick up around high tide, forecast to occur shortly after 11 a.m. ET (1600 GMT) around Boston, he said.