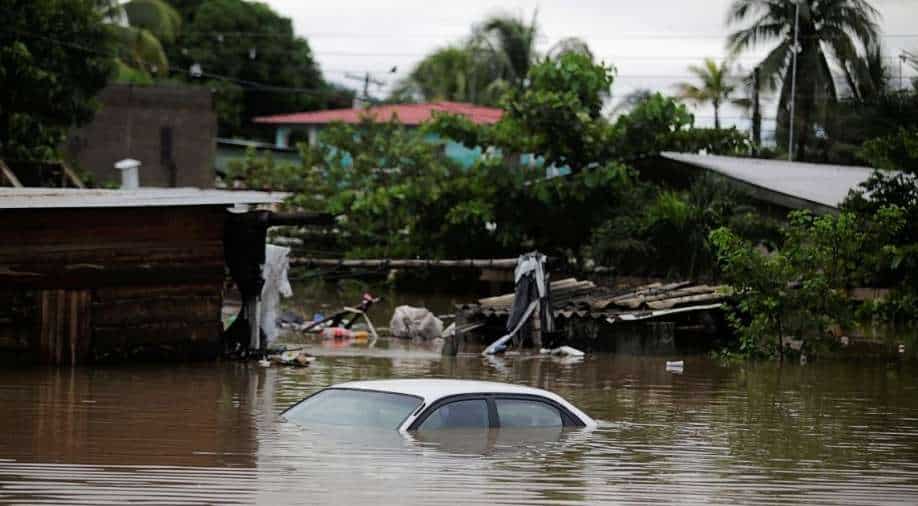 A submerged car is pictured at a flooded street during the passage of Storm Eta, in La Lima, Honduras Photograph:( Reuters )

One of the most powerful storms to sweep down on Central America in years, Eta struck Nicaragua as a Category 4 hurricane packing winds of 150 miles per hour before weakening as it moved inland and into neighboring Honduras

"The situation is serious, it's shocking and needs to be dealt with professionally, fast," Honduran President Juan Orlando Hernandez told HCH television, pointing to reports of people stranded in remote areas or stuck on roofs of flooded homes.

Damage and destruction had spread across the "vast majority" of the country and speedboats and helicopters would be sent to rescue people in inaccessible areas, Hernandez said.

By Thursday morning, authorities confirmed there had been at least six deaths, four of them in Guatemala and two in Honduras. Media in Nicaragua also reported two miners had died in a mudslide. Authorities have not commented on that report.

The fate of dozens of fisherman stranded off Honduras on Tuesday was still uncertain.

One of the most powerful storms to sweep down on Central America in years, Eta struck Nicaragua as a Category 4 hurricane packing winds of 150 miles per hour (241 kph) before weakening as it moved inland and into neighboring Honduras.

By Thursday morning, Eta was a tropical depression moving north-west through Honduras, at 9 miles per hour (14 kph), the US National Hurricane Center said. Heavy rains continued. Its maximum winds had fallen to 30 mph (48 kph).

One unidentified woman broadcast on Honduran television made a desperate plea for help in a neighborhood of La Lima, a municipality on the southeastern flank of San Pedro Sula.

"I've got five children on the roof of my house and nobody's helping me to get them down," she said.

Eta is forecast to return to sea and regain momentum as a tropical storm, reaching Cuba and southern Florida this weekend, the US National Hurricane Center (NHC) said.