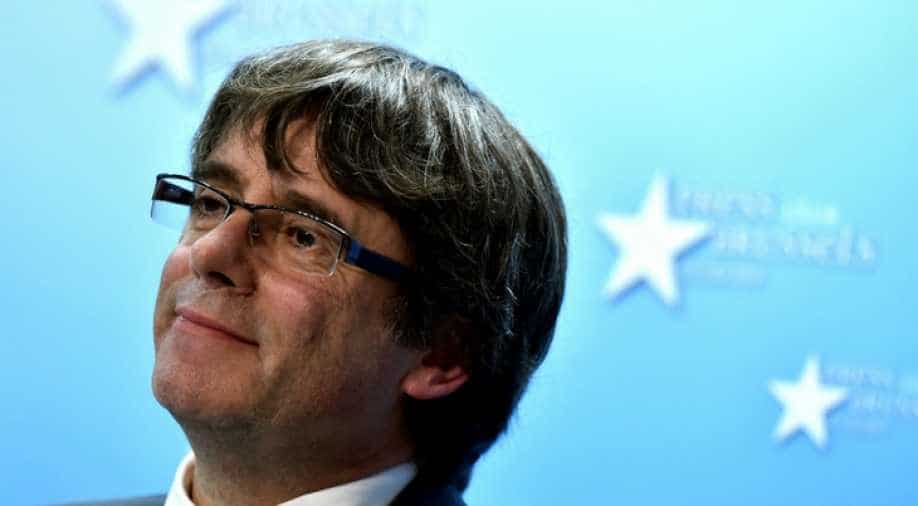 Prosecutors also asked for the preventive detention of eight of Puigdemont's ministers who did adhere with a legal summons to face accusations of sedition, rebellion and misuse of public funds. Photograph:( AFP )

Spanish prosecutors requested a European arrest warrant for Catalonia's axed leader Carles Puigdemont on Thursday after he failed to show up to be grilled by a judge over his role in the region's tumultuous quest for independence.

In another day of drama in Spain's worst political crisis in decades, prosecutors in Madrid asked a judge to approve the warrant for Puigdemont and four of his former ministers, all thought to be in Belgium, a judicial source said.

The source, who declined to be named, said Puigdemont had 'publicly announced his intention not to appear,' adding that he and two other former ministers asked to appear via videoconference 'without giving any information as to where they are.'

Prosecutors also asked for the preventive detention of eight of Puigdemont's ministers who did adhere with a legal summons to face accusations of sedition, rebellion and misuse of public funds.

A total of 19 people including Puigdemont, his deputy Oriol Junqueras and the speaker of the Catalan regional parliament had been summoned to be questioned on Thursday.

A hearing of the speaker and five others at the Supreme Court was adjourned until November 9 after their lawyers requested more time to prepare their defence.

But a judge at the National Court pressed ahead with separate proceedings concerning Puigdemont and his fellow former ministers. The judge, Carmen Lamela, was due to make a ruling later on Thursday.

Under Spanish law, rebellion carries a jail sentence of up to 30 years and sedition up to 15 years.

As they arrived at court on Thursday, the Catalan leaders, who were deposed by Madrid on Friday after the regional parliament declared independence, were greeted by cheering supporters but booed by opponents brandishing red-and-yellow Spanish flags.

'You are not alone', a group of around 30 people, mostly Catalan lawmakers, chanted as the former regional ministers ran the gauntlet of a mass of photographers and TV crews.

"The conflict between Catalonia and the Spanish state won't be resolved through courts and violence," said former Catalan president Artur Mas, in Madrid to show his support."The more fuel and wood you add to the fire, the bigger it becomes."

Catalan demands for independence date back centuries but have surged in recent years, in part due to a difficult economic situation that has left many Catalans fuming about their taxes going to Madrid.

Puigdemont's government organised an independence referendum on October 1 despite a court ban.

Spanish police tried and failed to stop it, in some cases firing rubber bullets at people defending polling stations.

A declaration of independence by the Catalan parliament followed last Friday, greeted by celebrations on the streets of Barcelona.

Back in Barcelona on Thursday, several hundred demonstrators gathered in front of the regional assembly chanting 'freedom' and 'Puigdemont is our president'.

Puigdemont, 54, explained in a statement from Belgium that some members of his government would go to the National Court "to denounce the drive of Spanish justice to pursue political ideas".

But others, including himself, "will stay in Brussels to decry this political process to the international community".

It was not clear how coordinated the actions were, however.

Javier Melero, the lawyer of two of the parliamentary members under investigation, said Puigdemont should have turned up.

The European Union, several members of which have disgruntled regions of their own, has swung firmly behind Rajoy.

In addition, there are signs of growing divisions in the separatist camp, with many unhappy with Puigdemont, particularly now he is hundreds of miles away.