South Korea's Moon to seek change with North, could put it on collision course with US 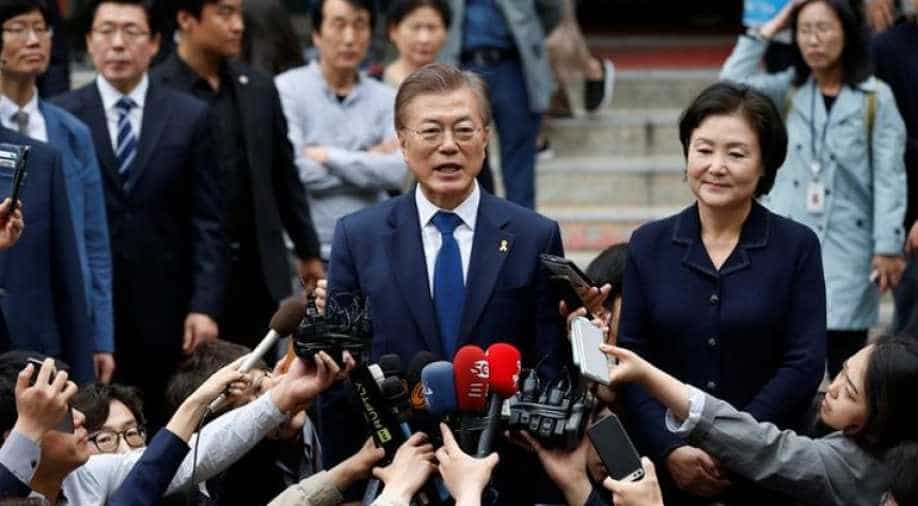 Moments after Moon was sworn in, he said he was willing to visit Pyongyang under the 'right circumstances'. Photograph:( Reuters )

The election of South Korea's new president Moon Jae-In heralds a sea change in Seoul's approach towards the nuclear-armed North -- and puts it on a potential collision course with Washington.

The left-leaning new leader -- a former human rights lawyer -- favours engagement and dialogue with Pyongyang over its atomic and missile ambitions.

In contrast, Donald Trump's administration has called for stepped up sanctions and warned military action is an "option on the table", sending fears of conflict spiralling.

The 1950-53 Korean War ended in an armistice rather than a peace treaty and the two Koreas are divided by the Demilitarized Zone (DMZ), one of the most heavily fortified places on Earth.

The isolated, impoverished North is accused of widespread rights abuses and dreams of a missile capable of delivering a nuclear warhead to the United States.

It has carried out five atomic tests -- two of them last year -- and multiple rocket launches.

The last time South Korea had a liberal leadership it embraced a "Sunshine Policy" of rapprochement with Pyongyang and, as a close aide to then president Roh Moo-Hyun, Moon helped arrange the last inter-Korean summit with late North Korean leader Kim Jong-Il.

"I would go anywhere in the world -- including North Korea itself -- if doing so would solve the North's nuclear problem," Moon told reporters during the presidential campaign. "I would meet anyone for that."

He also advocates resumption of some inter-Korean projects shuttered under the conservative governments of the last 10 years, including the Kaesong joint industrial zone, where South Korean firms employed Northern workers.

But his scope for manoeuvre will be limited, analysts say.

Under Moon, Seoul's policy towards the North will change "substantially", Robert Kelly of Pusan National University told AFP, "but less substantially than many people on the South Korean left and Moon himself would like".

Unlike 20 years ago, when the Sunshine policy was first introduced, the North now has nuclear weapons, an increasingly advanced missile programme, and a reputation as a drug manufacturer and counterfeiter.

"That doesn’t mean we shouldn’t talk to North Korea," Kelly said, but if Moon wants to pursue re-opening Kaesong or a 'Sunshine Policy 2', "he's going to collide with the American government where there is a pretty solid consensus right now that North Korea is a genuine global menace".

'Good cop'
The new president wants the South to have a greater say in its alliance with security guarantor the United States, which has 28,500 troops in the country.

Their presence is also in Washington's own interests, he said. "They are important not only to our own security but also to the global strategy of the US."

He has expressed ambivalence over the US THAAD missile defence system, whose deployment in the South has infuriated China, and which Trump has demanded Seoul pay for.

But its accelerated installation -- it was declared operational last week -- meant he can now present it to opponents as a "fait accompli", analysts say.

To his critics, any concession to Pyongyang is dangerous and they accuse Moon -- whose parents fled the North during the Korean War -- of being a Communist sympathiser.

Others suggest his presidential victory could give the US room for manoeuvre.

Trump has moderated his tone more recently, saying he would be "honoured" to meet North Korean leader Kim Jong-Un, and Cheong Seong-Chang of the private Sejong Institute told AFP that Washington was "groping for an exit following all the huffing and puffing over the past few months".

"Moon's policy of engagement may appear to clash with Trump's line of heaping utmost pressure and sanctions, but they are complementary to each other as Seoul may play a 'good cop' role here," he said.

Bomb shelter
South Koreans are accustomed to living under the threat from the North, and opinions are divided on how to handle Pyongyang.

With corruption and the economy uppermost in voters' minds, surveys showed that only around 18 percent considered security the most important issue in the election.

And engagement has its backers.

Gyodong island lies on the DMZ, with the North barely two kilometres away at its closest point, and its residents are subject to a constant barrage of propaganda broadcasts from both sides.

One of the polling stations where voters cast their ballots this week stands just a few hundred metres from a new municipal facility under construction -- a giant bomb shelter with thick blast doors.

As well as its nuclear arsenal, Pyongyang has a huge conventional military at its disposal, including vast artillery forces within range of Seoul.

Resident Lee Mee-jung declined to tell AFP who she voted for.

But she said: "We're in close quarters with North Korea. So we need a more peaceful policy of talking to each other so that war doesn't break out."