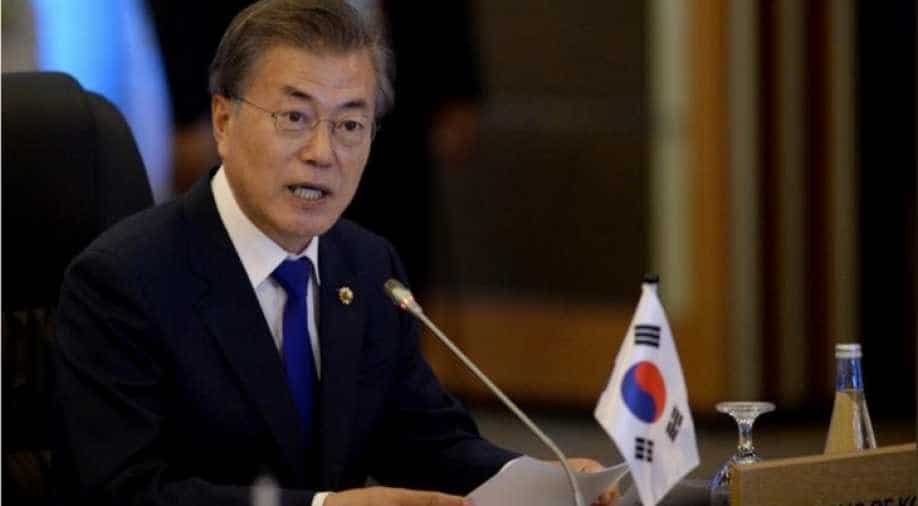 Moon's comments came a day after Seoul's foreign ministry said the deal - which was pushed and endorsed by his predecessor, Park Geun-Hye - was faulty and had 'failed to reflect the victims' views'. Photograph:( Reuters )

The issue of women forced into sexual slavery for Tokyo troops during the World War II is a hugely emotional subject that has marred ties between the South and its former colonial ruler, Japan.

Moon's comments came a day after Seoul's foreign ministry said the deal -- which was pushed and endorsed by his predecessor, Park Geun-Hye -- was faulty and had "failed to reflect the victims' views".

The unpopular agreement was meant to end the decades-long dispute with a Japanese apology and a total of 1 billion yen ($8.8 million) payment of money to survivors.

But it sparked anger among some survivors seeking an explicit apology from the Japanese government for the wartime abuses.

Following Moon's decision to order a review of the deal after being elected to office this year, a task force published a report Wednesday saying the agreement was rushed and did not do enough to seek out the opinions of the victims, often known by the euphemism "comfort women".

"It has been confirmed that the 2015 deal...was seriously flawed," Moon said in a statement released on Thursday.

"Although the 2015 deal was an official agreement endorsed by the leaders of both countries, I'd like to make it clear that the deal cannot solve this issue of 'comfort women,'" he said.

The latest revelation by the task force is "regrettable but unavoidable," Moon said, telling officials to "come up with follow-up measures at the earliest date" without elaborating further.

It is unclear whether Seoul will call for renegotiations or walk away from the deal.

Tokyo has urged Seoul to stick with the 2015 agreement.

Mainstream historians say up to 200,000 women -- mostly from Korea but also other parts of Asia including China -- were forced to become sex slaves for Japanese soldiers during the war.

The Japanese government denies it is directly responsible for the abuses, insisting that "comfort women" were recruited by civilians and that the army brothels were commercially operated.

Despite the 2015 agreement, ties between the two neighbours remain tense over statues which South Korean activists positioned outside Japanese diplomatic missions in memory of victims.