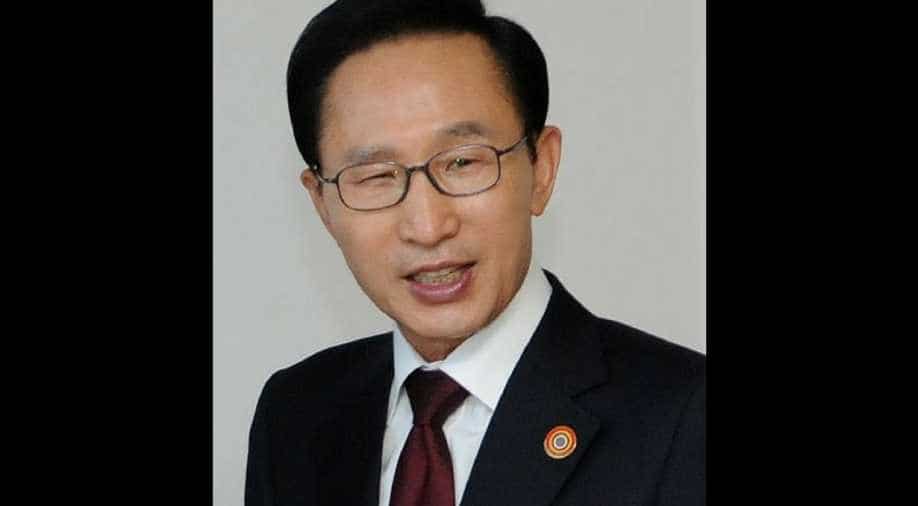 Former South Korean president Lee Myung-bak was questioned over corruption today, the last of the country's living ex-leaders to be embroiled in a criminal inquiry.

Allegations of graft involving the conservative 76-year-old's relatives and aides during his term have mounted in recent weeks as prosecutors investigate multiple cases of bribery amounting to millions of dollars.

The probe means that all four living former South Korean presidents have been convicted, charged, or investigated for criminal offences.

"I stand here with a heavy heart," Lee said as he arrived at the prosecutors' office in Seoul, after a car journey from his home in the capital covered live on television.

"I'm very sorry for causing concern to the people," he told reporters, adding that South Koreans' livelihoods were "difficult" and the security situation on the Korean peninsula was "dire".

Lee, who was president from 2008 to 2013, has previously denounced the inquiry as "political revenge" and said Wednesday he hoped it would be the "last time in history" that a former South Korean head of state was summoned for questioning by prosecutors.

"As a former president, I have a lot to say about this but I will spare my words," he said.

South Korean presidents have a tendency to end up in prison - or meet untimely ends - after their time in power, usually, once their political rivals have moved into the presidential Blue House.

Conservative Park Geun-hye was ousted last year over a massive corruption scandal that emerged in 2016, and the verdict in her bribery and abuse of power trial is due next month, with prosecutors demanding 30 years in jail.

Lee's own predecessor, the liberal Roh Moo-hyun, committed suicide by jumping off a cliff after being questioned over corruption allegations in 2009.

After the South embraced democracy in the 1990s former dictator Chun Doo-hwan and his friend and successor Roh Tae-woo were handed death sentences for their involvement in a 1979 military coup and for receiving hundreds of millions of dollars in bribes from businesses.

Their sentences were later commuted to life in prison, and they were eventually pardoned and released after serving about two years each.

Yoo Seong-min, head of the minor opposition Bareunmirae party, blamed the phenomenon on "the shortfalls of the winner-takes-all presidential government system" that creates opportunities for corruption.

It was a "big tragedy in the country's constitutional history" that a former president was in custody and another one was being questioned by prosecutors, he added.

But Hong Joon-pyo, head of the main opposition Liberty Korea Party, said the government of the liberal current President Moon Jae-in was "digging up old wrongdoings" and taking action against Lee for political purposes.

Lee, accompanied by his defence lawyer, was received by a senior prosecutor and given tea before being ushered into room 1001, where Park underwent a marathon 21.5 hour questioning last year.

Lee is expected to return home after the questioning, but prosecutors are thought likely to then ask a court for an arrest warrant.

Two of the ex-president's former aides have been arrested as part of the investigation and the homes and offices of his brothers raided.

The allegations include claims that the Samsung Group bought a presidential pardon in 2009 for its chairman Lee Kun-hee, who had been convicted of tax evasion and given a suspended jail sentence.

Samsung reportedly paid six billion won ($5.6 million) in legal fees to a US law firm on the former president's behalf.

Both Samsung and Lee have denied the allegations as groundless.

According to reports, Lee is also accused of accepting 2.2 billion won from a former CEO of a state-financed banking group for helping him assume the post.

He allegedly pocketed 1.7 billion won of secret funds from the country's spy agency, received 400 million won in bribes from a lawmaker, and embezzled millions of dollars from DAS, an auto parts company he is said to own under the names of his relatives.

The interrogation was expected to last around 20 hours, Yonhap news agency said, with prosecutors having prepared around 120 pages of questions relating to some 20 alleged offences.

A senior prosecutor told journalists: "We will treat the former president with dignity but we will conduct a thorough and transparent probe."