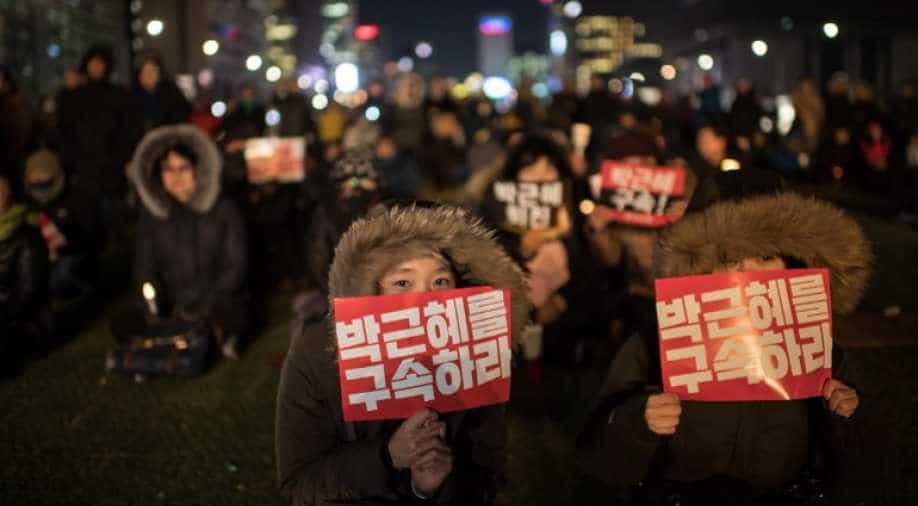 Park is continuing to refuse to step down despite these protests and despite approval ratings hovering around four percent. In photo: A woman hold a placard reading 'Arrest Park Geun-Hye' on December 9, 2016. Photograph:( AFP )

The country's lawmakers voted overhwelmingly to impeach embattled President Park Geun-hye on Friday. A constitutional court will now investigate whether Park can be impeached in a process that could take up to six months. The motion was passed by 234 lawmakers with 56 opposed.

South Koreans celebrated with cheers, hugs and selfies after protesting that the president step down for months.

"I totally agree with the impeachment of the Park Geun-hye to protect the justice of our South Korea," said Myeong Hoon Choi, a male protester.

A little boy said, "I'm so happy. We have to pick a better president who won't make this happen again."

Park has refused to leave office despite low approval ratings. However, she said she will adhere to the constitutional court's ruling.

"The ruling party and the major companies, all things with the governments are involved. So I don't know how we are going to solve this, but it should be solved, like, if not there's no future for our next generation or kids," said Yoo Min, a female protester.

Every Saturday for the last six weeks, demonstrators have gathered in peaceful and celebratory protests.

The 64-year-old president is accused of colluding with a friend and former aide to pressure big businesses to donate to two foundations set up to back her policy initiatives, news agency Reuters said.