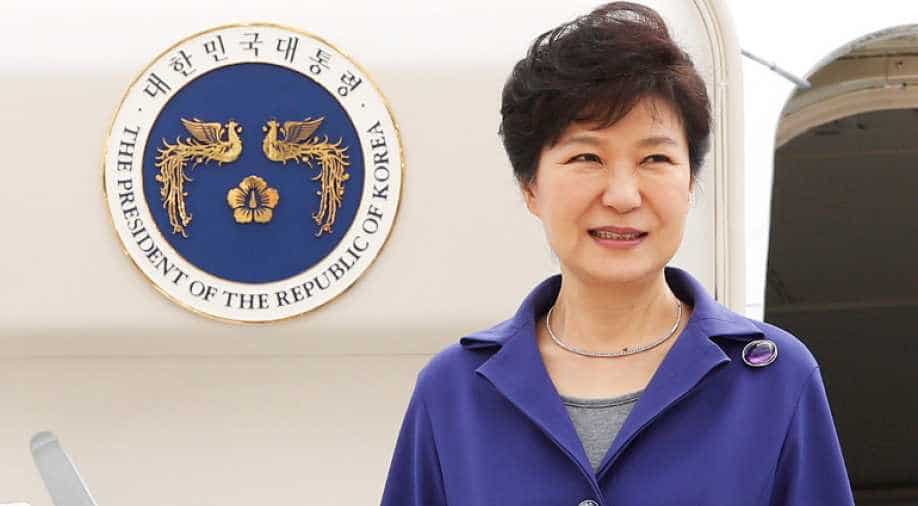 Park, the daughter of a former military ruler, is under intense pressure to resign immediately, with big crowds taking to the streets of the capital, Seoul, every Saturday calling for her ouster. Photograph:( Reuters )

South Korea's parliament introduced a bill on Thursday to impeach President Park Geun-hye, setting the stage for a historic vote to oust the embattled leader engulfed in an influence-peddling scandal.

Parliament is expected to vote on Friday in favour of impeachment, although the Constitutional Court must decide whether to uphold the motion, a process that could take up to 180 days.

Opposition parties have said they believe they will get the two-thirds majority needed to pass the bill, with support from about 30 members of Park's conservative Saenuri Party to secure the necessary 200 votes.

Park, 64, said this week she would await the court's ruling, signalling that the country's six-weeks-long political crisis is set to continue.

Park, the daughter of a former military ruler, is under intense pressure to resign immediately, with big crowds taking to the streets of the capital, Seoul, every Saturday calling for her ouster.

Her approval rating is at a record low of 4 per cent. A Realmeter poll released on Thursday said 78.2 per cent of respondents wanted Park to be impeached.

She would be the first democratically elected South Korean president not to serve a full five-year term. Former president Roh Moo-hyun was impeached by parliament in 2004, a motion that was overturned by the Constitutional Court which said grounds for impeachment were insufficient.

Park is accused of colluding with a friend and a former aide to pressure big businesses to donate to two foundations set up to back her policy initiatives.

She has denied wrongdoing but apologised for carelessness in her ties with the friend, Choi Soon-sil.

An impeachment vote must be held within 72 hours of the motion's introduction, and the speaker of parliament, Chung Sye-kyun, asked for a vote on Friday.

The stakes are high for both pro- and anti-Park factions.

The leaders of the two main opposition parties said their 159 members would all resign if the impeachment motion failed, taking responsibility for their inability to follow through on the demands of the public.

That would then mean by-elections to fill their seats, which could alter the make-up of the unicameral legislature. In April, Park's Saenuri Party unexpectedly lost its parliamentary majority during elections.

The Friday impeachment vote will cap a dramatic week.

On Tuesday, leaders of the country's largest conglomerates, including Samsung Group scion Jay Y Lee, were grilled during a 13-hour hearing in which they denied that donations to two charitable foundations supported by Park and at the centre of the scandal were made in exchange for favourable treatment.

On Wednesday, former associates of Choi, the president's friend, testified to the same parliamentary panel that Choi conducted herself in ways that made it clear she was exceptionally close to Park and was influential.

The finance ministry said it was concerned about further risks to the economy from "domestic issues" which could dent consumption and investment at a time when many global uncertainties persist.

Park's father, Park Chung-hee, led South Korea for 18 years after seizing power in a 1961 military coup. He was murdered by a disgruntled spy chief in 1979.