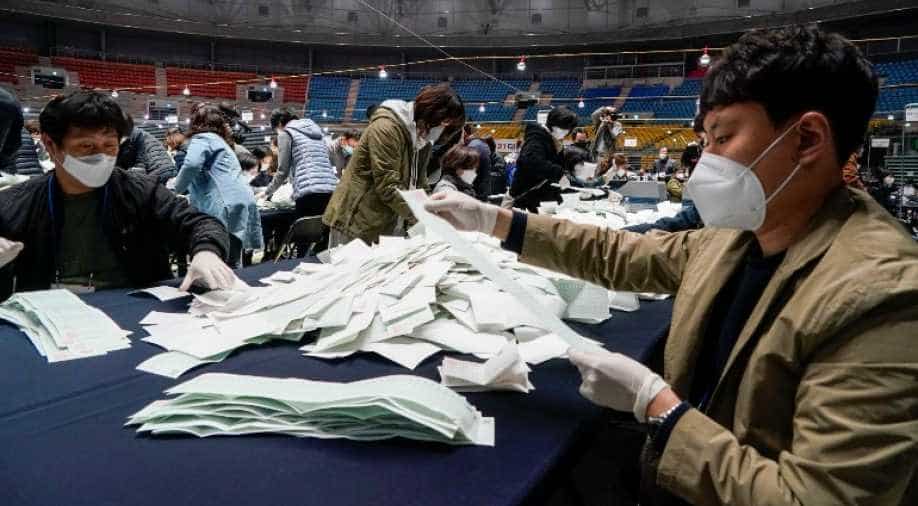 As many as 66.2 per cent people voted, the highest turnout in any parliamentary elections since 1992

South Korea's efforts to mitigate the novel coronavirus crisis turned out to be a big reason as President Moon Jae-in's party got a massive win in the parliamentary elections.

The elections in the country were seen worldwide as most parts are experiencing a lockdown and South Korea, on the other hand, voted.

As many as 66.2 per cent people voted, the highest turnout in any parliamentary elections since 1992, according to the National Election Commission.

There were strict measures imposed for voting, with voters temperatures getting checked, asked to wear plastic gloves, hand sanitizer and maintain a safe distance from each other as means to avoid a potential coronavirus attack.

All 14,000 polling stations were also disinfected and nearly 2,000 COVID-19 patients were allowed to vote either by mail or in person through special booths.

Over, 13,000 people who are in self-quarantine cast their ballots after voting ended.

Moon's Democratic party won 180 seats out from the total 300, 60 more than the current 120. The main conservative coalition secured 103 seats.

A few months ago, scandals over power abuses, slow down in economic growth and dovish approach towards North Korea were seen as major concerns for Moon to come back to power.

However, South Korea that was hit-badly initially by COVID-19 managed to control the epidemic and reduce the fatality became a major factor in the Democratic party winning big.

The country reported 22 coronavirus cases on Thursday, with cases lowering to less than 50 on a daily basis for more than two weeks.